When the thought of turning 30 or 40 crossed my mind, I always thought I'd do something exciting for the occasion.  Maybe skydiving?  With 30 in the rear view mirror, and 40 quickly approaching, I decided that I was too afraid of dying (that seems to happen as you get older, you see) than to risk my life jumping out of a perfectly good airplane.  So the next best option?  Staying ON a helicopter!  Combined with my love for New York City, taking pictures from a helicopter seemed like the perfect way to get an adrenaline rush, all while taking in the beauty of New York in the fall.

After a lot of research, I decided to go with FlyNYON.  Their prices were reasonable, and made even more reasonable when I was able to use a 45% off coupon code during one of their sales.  The building is located in New Jersey, but it was easy enough to take the New Jersey PATH train there from the Oculus in Manhattan.  Once in New Jersey, you have to take a bus, cab, or Uber/Lyft to the actual location.  We opted to take an Uber. 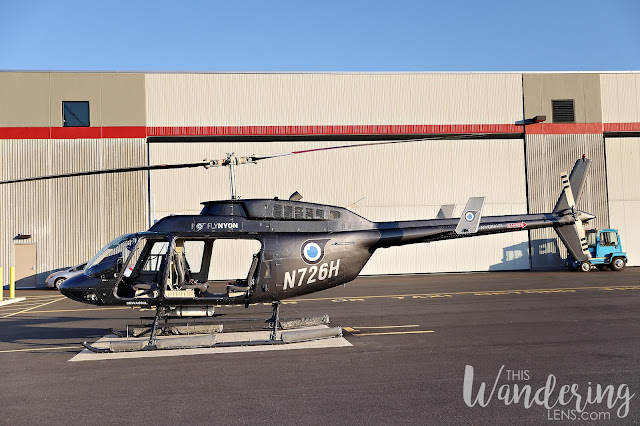 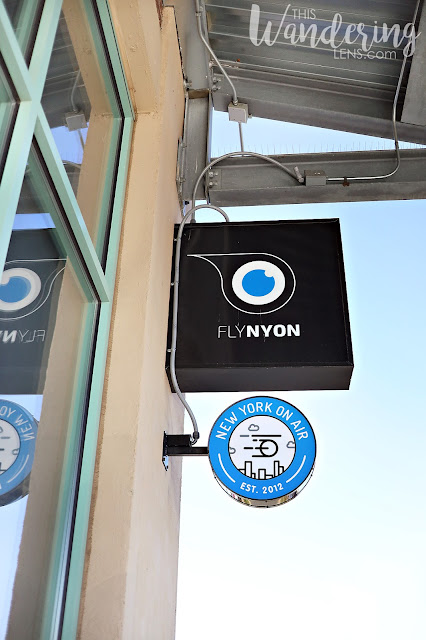 Once you get there, they take your information and weigh you with your gear that you plan on shooting with on the helicopter on your body.  I thought this was weird, but it did make sense.  They use this information to determine where you will sit on the helicopter so that the weight distribution is balanced.  Once this was done, we had some down time since we arrived a bit early.  They've got this prop helicopter with some LED panels to simulate being in flight that you can take pictures in. 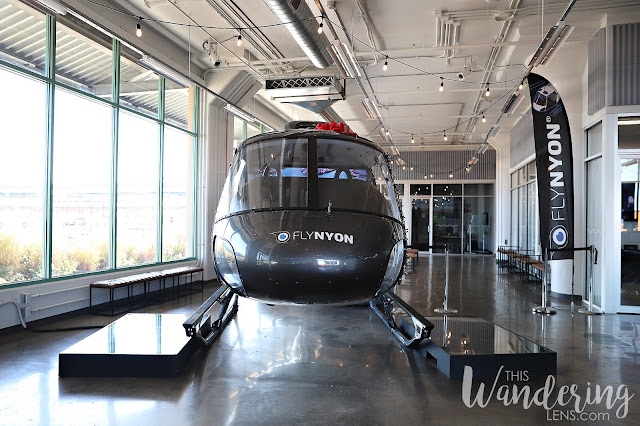 There is also a small gift shop and hot cocoa and drink/snack machines. 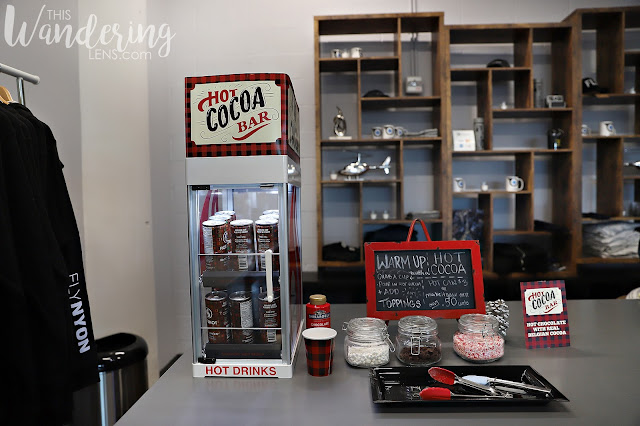 Not to mention some hoodies and t-shirts that I didn't buy. Admittedly, I did want one of their hoodies though! 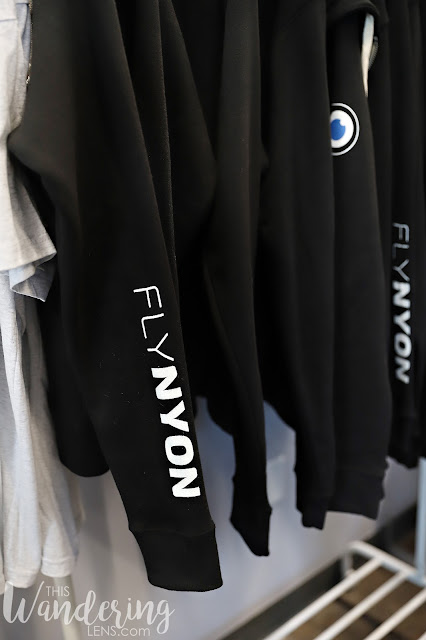 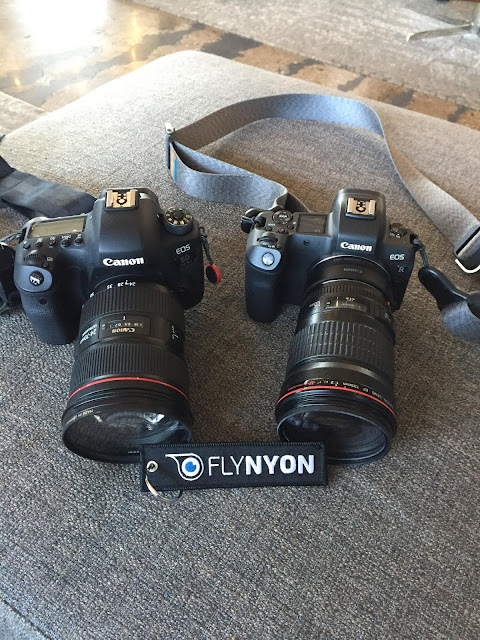 photo taken on my iPhone

I don't know how popular this is to do, but they even rent out DSLRs and lenses.  The rentals start at around $40.  While that doesn't sound like a ton of money, keep in mind you are only using that lens for the 15 to 30 minutes you're on the helicopter depending on which package you bought!  In comparison, if you rented from Borrow Lenses, you'd get more time with your rental for the price you pay. 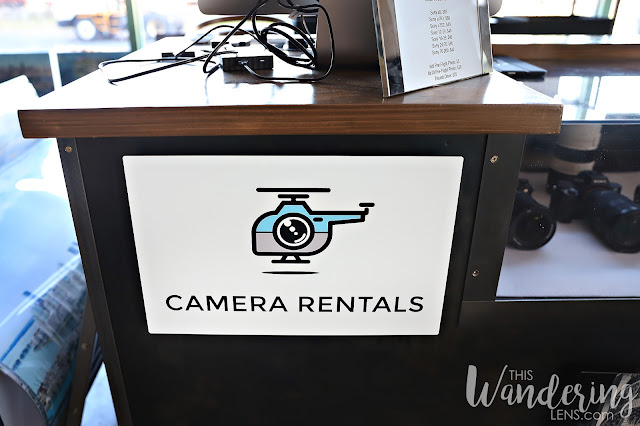 Once it's time to get everyone ready for the flight, they take everyone into a meeting room to view a safety video.  This is where I have my first criticism.  I'm not sure if it's possible - although I don't see why not - but they should've sent a link to our emails to watch this video prior to getting to the location.  Then they need to make us watch the video AGAIN once we are there.  There were some safety precautions on the video that I thought people could easily forget, especially if they're excited about going on their first helicopter ride.

Afterwards, we were ushered into another area where they put harnesses on us.  We were instructed to leave all of our personal items in this plastic container that had a padlock on it.  The plastic container is much like what they sell in the gardening area at Home Depot to store gardening supplies.  This gave me very little confidence in the security of our personal belongings being safe.  Not to mention that I saw a bunch of backpacks thrown in there with some girl's Chanel purse.  She seemed hesitant to put her purse in there, and I could see why.  There's no way I'd put a Chanel purse in there, much less my other camera gear that was staying behind in my backpack that I reluctantly left in there as well.  When I went to use the restroom, I saw a whole wall of actual lockers (like the kind you'd see at the gym).  There was no way they had that many employees, so why wouldn't they let patrons use those to lock their own things up in?  They should at least make this option available to people.  Fortunately, nothing happened to our stuff, but it really bothered me that their means of storage was not as secure as it should've been.

The process of getting everyone into harnesses seemed to take forever.  Understandably, we had to demonstrate that we understood how to free ourselves from the helicopter just in case we had to evacuate.  Then we were shuttled to a nearby hangar where we would board the helicopter. 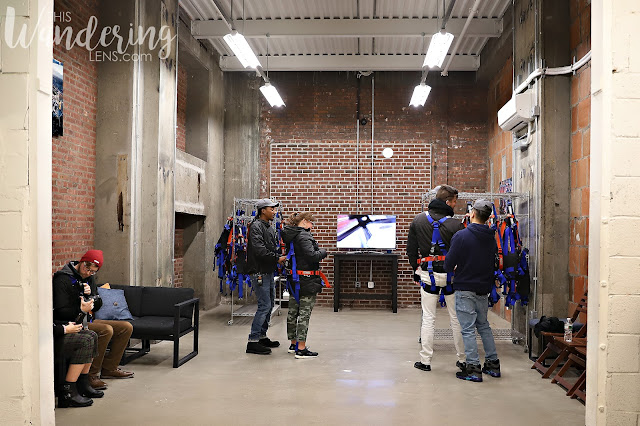 There was a bit more waiting at the hangar.  We got to meet the pilot of our flight, and after all the waiting, we were led outside to our helicopter for our 30 flight, which we upgraded from a 15 minute flight after they noted the locations a 15 minute flight would cover.  Disappointed in this, we opted for the $125 upgrade to a 30 minute flight. 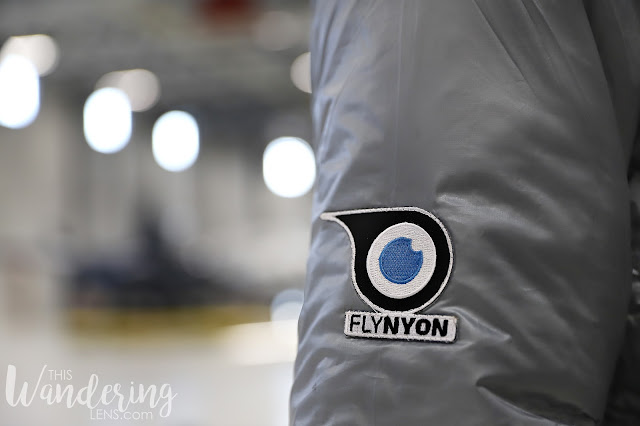 When I walked by these people about to board their helicopter, I noticed that one of the openings on this "doors off" flight was much smaller than the opening on the other side. 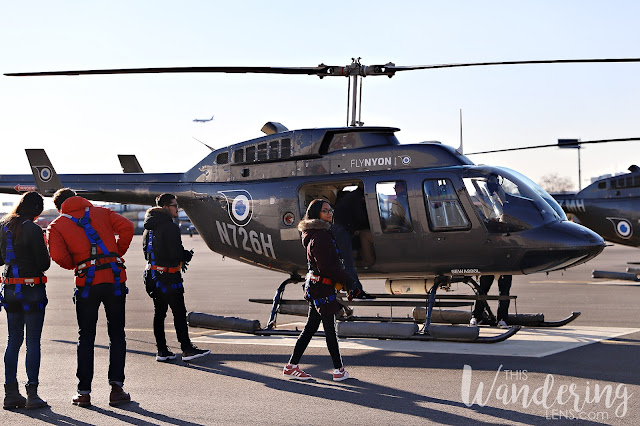 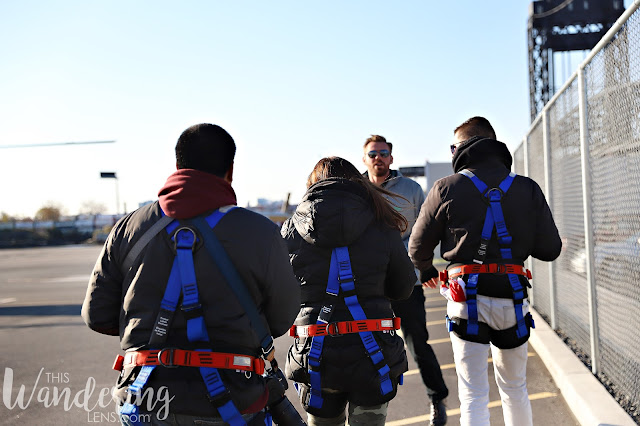 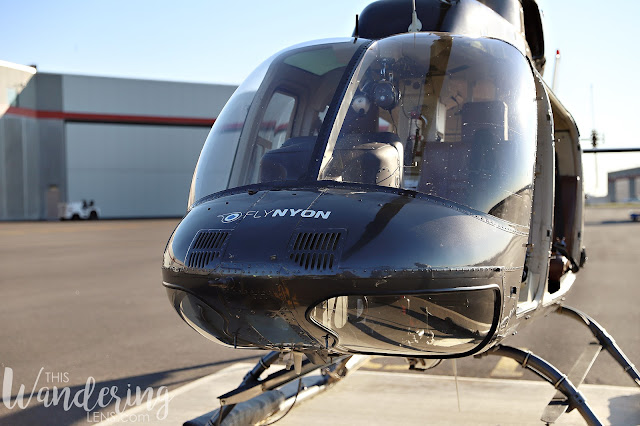 When they assigned us our seats, I was assigned to the crappy seat where the opening was much smaller.  As you can see from this photo below, I had very little room to turn out and take photos and was limited to taking photos of only things a little to the right of this "wall" that was in my way.  I had trouble even getting my camera over the side of the "wall".  This flight was doors off for everyone, except for me.  I voiced this concern to our pilot, and while he seemed sympathetic, his only consolation to me was to offer me to get on another flight, and "hopefully" not be assigned the same seat.  Hopefully?  I was pretty upset and fuming over this.  Understandably, no one wanted to switch seats with me - which only confirms to me that it's a crappy seat that I paid the same price as everyone else for, while not get the full doors off experience.  In all of their Instagram posts, you'll notice the people hanging over the side of the helicopter.  That's because the pictures are from the OTHER side of the helicopter where the opening allows both passengers to swing their legs over and have more range of motion to take photos.  I opted to stay on this flight because I was already too invested in getting to this point.  The pilot did make several passes over the same areas to try to give me an opportunity to get shots I couldn't get because of this obstruction. 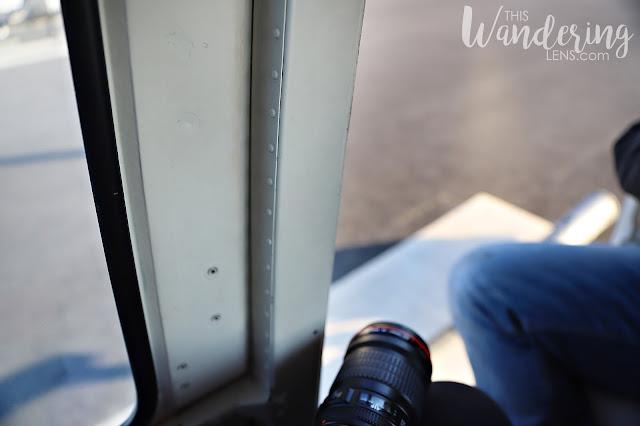 While I was appreciative of his efforts, it is a lot more difficult to get shots than I thought it was going to be - especially if you've never been on a helicopter before.  The movements were quick and sometimes very abrupt.  It felt sort of like being on a roller coaster.  There were moments you felt your stomach drop because of the quick change in elevation. 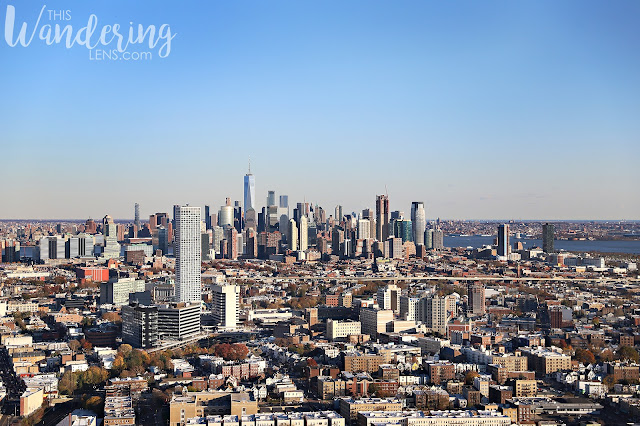 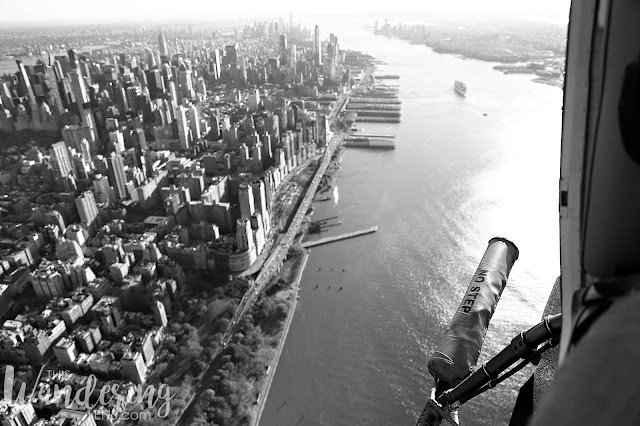 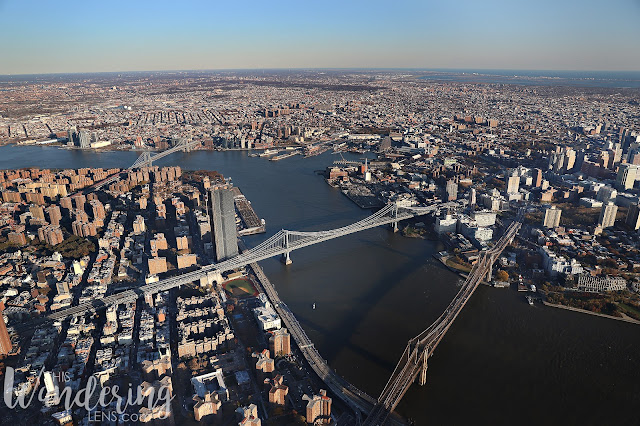 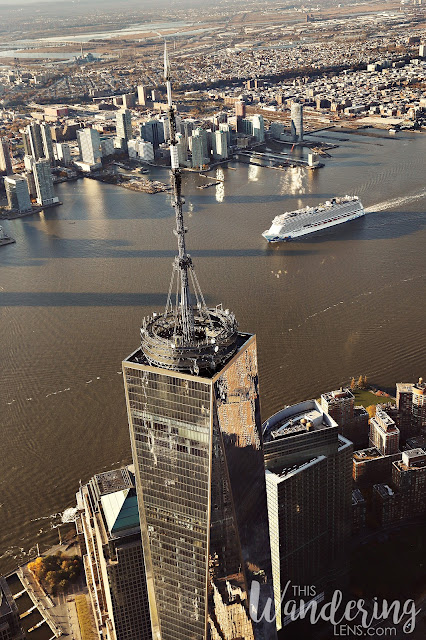 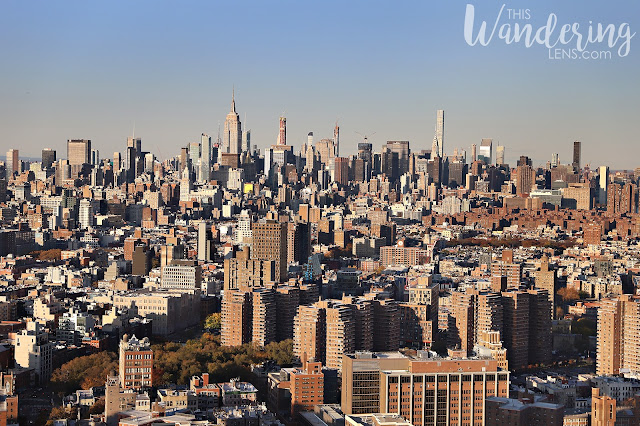 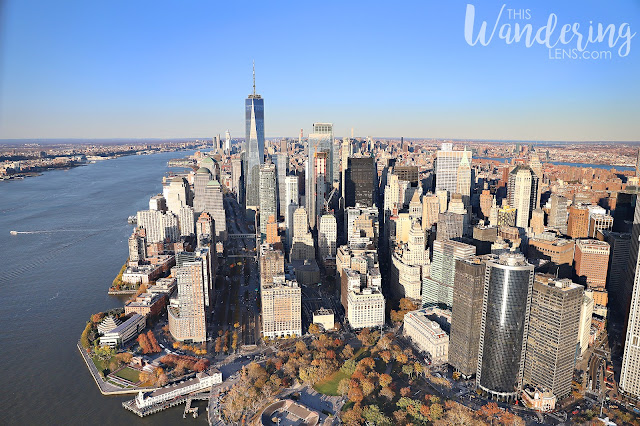 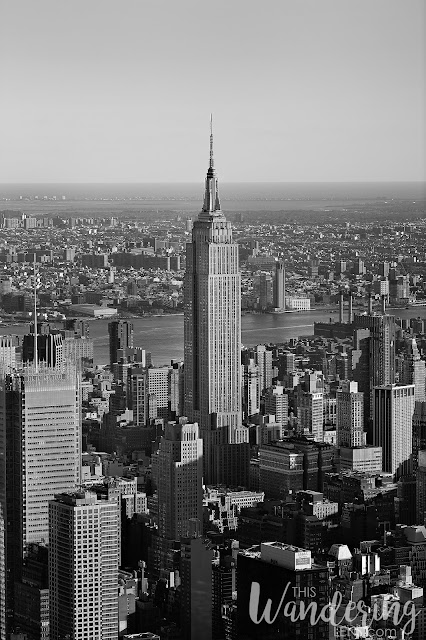 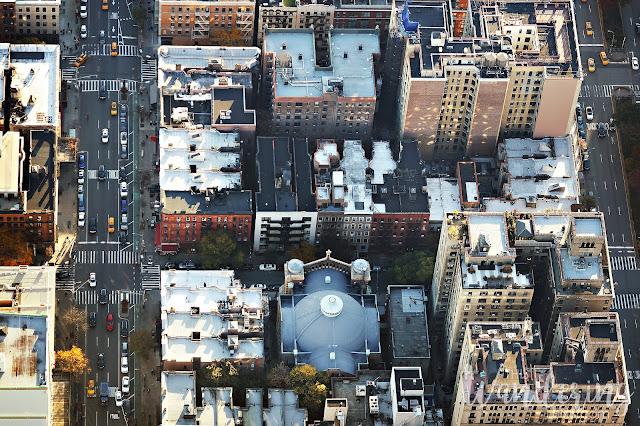 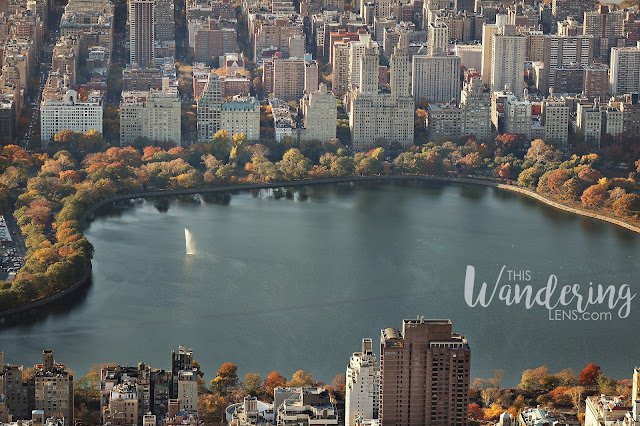 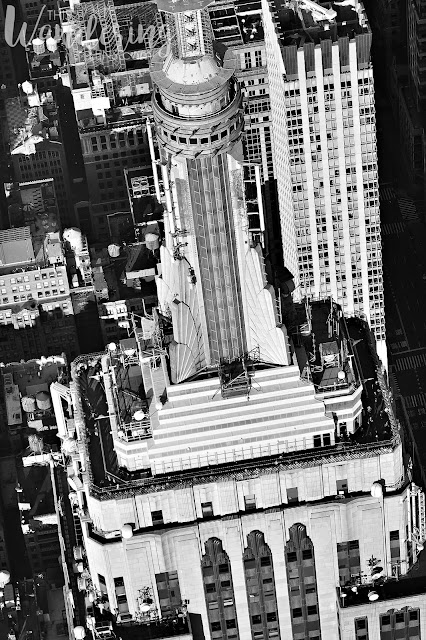 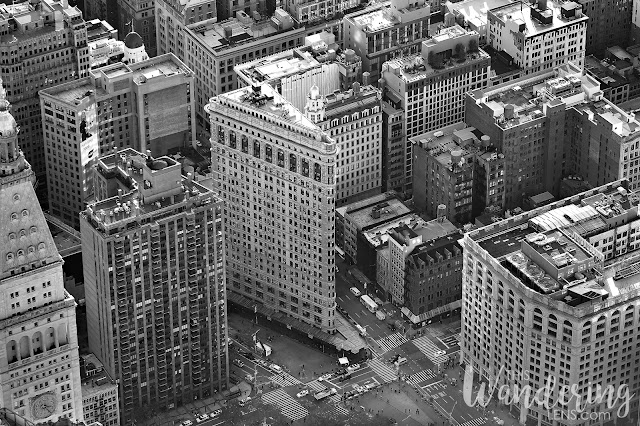 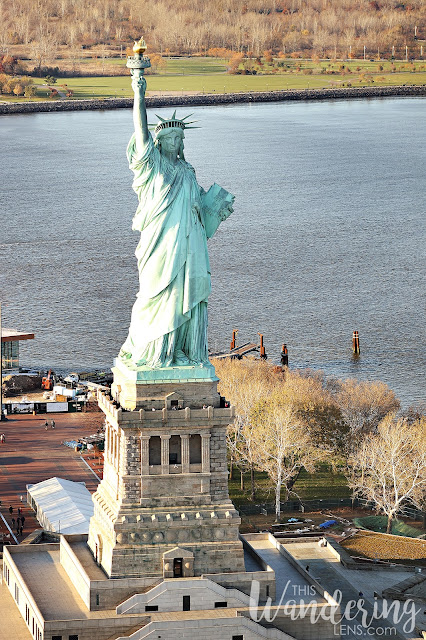 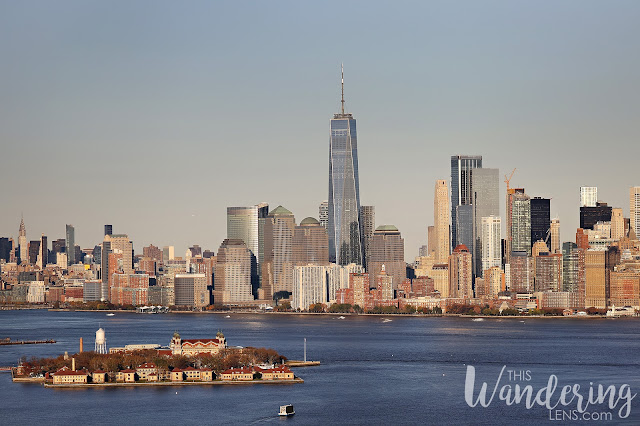 Here's my photo of my feet "dangling" over the helicopter.  Go ahead and compare them to what you see on FlyNYON's Instagram account, and tell me if you think this is the same experience.  After our flight was done, I was able to find the manager and tell him about my experience.  He was quite nice about it, and even offered me a free sunset flight (which usually costs more) for later that evening.  I was leaving the next day, and already had plans for the rest of the evening, so I declined his offer.  While it was my choice to decline the offer (trust me, it was tempting), I still felt a little cheated in this experience.   One of the employees reiterated that seat assignment is not guaranteed.  Okay, I get that.  I get the balancing of the weight.  If that was the case, why did our pilot even try to get everyone to switch seats with me?  How is someone ever guaranteed the experience they paid for if you market this as a "doors off" flight, and you're the person who gets stuck with the crappy seat assignment?  I didn't think of it at the time, but they need to disclose this information when people book their flights and offer this particular seat at a discounted rate.  I'm sure there are people out there who want the doors off experience, but maybe don't want the wind in their face (which by the way, was the only positive of sitting in that seat).  This, to me, would seem the only fair way to offer everyone a fair experience.  In the end, the manager gave me his card and offered me a discount on a future flight.  It's a nice gesture, but still doesn't solve the actual problem.  This is something they need to address, because knowing what I know now, I wouldn't do this again if I were to pay the same amount as everyone else and get that crappy seat again. 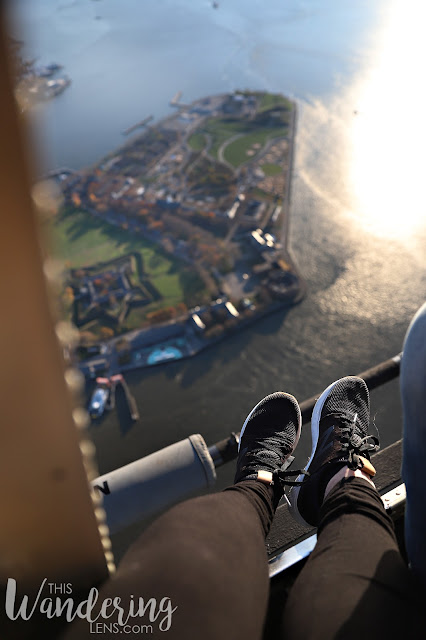 That was a bit of a rant, but if you're doing this for photos, I feel it's important to know ahead of time.  Here are some other things to keep in mind if you're considering a FlyNYON (or comparable helicopter experience)!

1)  Time of day is very important.  Our flight was at 3pm, and the lighting was not the best.  The sunset flights are pricier, but you'll get the better light.  It was very easy to see photos like the ones below in their hallway and think you're going to come out of this experience with similar photos.  Keep in mind those were taken by photographers who were probably on longer flights and were given special flight accommodations to be able to get shots like these to be used for marketing purposes.  They were taken during the best time to take photos, and the photos reflect that.  The weather and clouds also make a big difference.  We had a pretty boring sky that day.  Had there been an upcoming rainfall, the clouds might've looked different and yielded better photos.  Basically, keep your expectations reasonable. 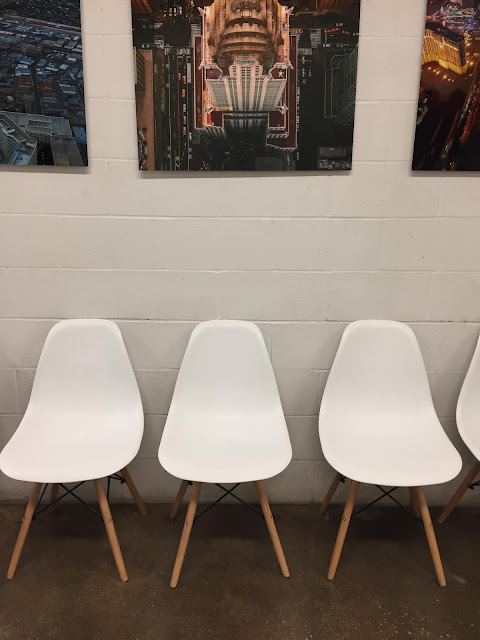 photo taken with my iPhone

2)  Look at photos that you'd like to capture ahead of time and determine which lenses would be best to get those shots.  I was too lazy to travel with my 70-200mm lens, and regretted not using a longer lens for some of the shots I wanted.  I did the best I could amidst being frustrated about my seat assignment and getting used to the motions of being in a helicopter.  Unless it's the only thing you have, I wouldn't recommend taking a prime lens on the flight because it would severely limit your compositions.

3)  Know that you could get the crappy seat.  This may not be important to everyone, but as a photographer that was more interested in taking the photos as opposed to the experience of just being on a helicopter, I found my seat assignment severely limiting.  Despite the pilot trying to do what he could, I still feel robbed of having the same experience as everyone else while still paying the same price.  This is unfair, and maybe if more people inquired about the seat assignment, the company will fix this issue by offering that seat up at a discounted rate.

Some of my friends have discussed doing a helicopter ride over Los Angeles.  We'll see.😬  Thanks for reading, and hopefully this gave you a glimpse into the helicopter experience!