The Mission Inn Festival of Lights

The Mission Inn Festival of Lights is an annual tradition where you can feel all the warm festivities of the holiday season in the heart of Riverside.  The Mission Inn Hotel is dressed up in 5 million dazzling lights, and the street directly in front of the hotel is shut down for pedestrians.  I was looking for something to shoot at blue hour and remembered that this was still an active event.  Knowing that it would be crazy traffic, I had the sense to get there early to get some street metered parking for $1.50 an hour.  I highly recommend getting there early if you can.  A few years back, I recall it being a little bit crazy as the evening progressed. 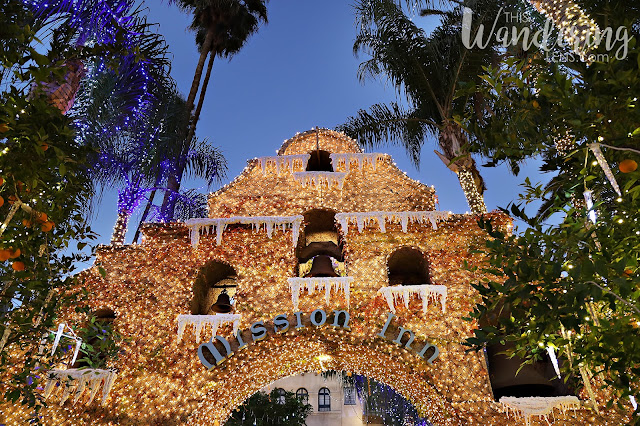 Christmas tree inside the Mission Inn 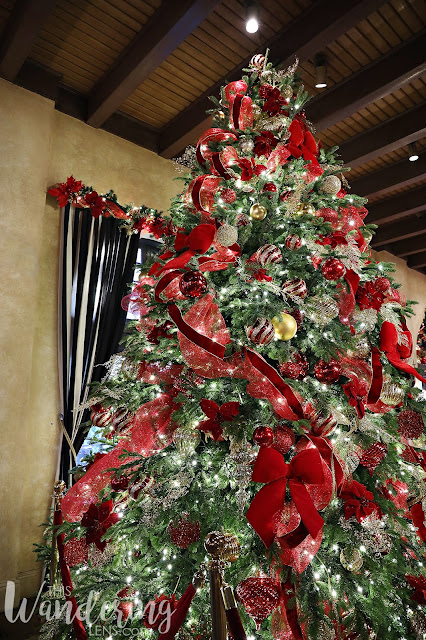 They've gotten a lot stricter about access to the rotunda.  This was mainly why I wanted to go.  I don't know if it was always this way, but they only allow hotel guests to access the rotunda area now.  If there was one thing I learned on this day, it is that persistence really does pay off.  I approached several hotel staff, each telling me that I couldn't go to the rotunda just to take a picture.  Some of them wanted to tell me but couldn't, and some hinted at other ways I could get into this area.  One particular person told me that if I went to the Italian restaurant adjacent to the hotel, there is a door that directly leads into the small courtyard where the fountain is on the ground floor.  The hostess there told me that if I could find the manager, she might be able to let me in.  After one more failed attempt asking a hotel employee, I decided to try the restaurant.  I found the manager and she let me in to take my pictures!  I felt like I had won a contest!  I had to shoot really fast, so once she let me in, I walked nonstop to the top floor (and yes, I am sore from doing that still).  It wasn't a clean shot, as there were many events going on at the hotel that day, and on top of this, I also didn't have my widest lens with me.  Nevertheless, I was still ecstatic I was granted access to this area. 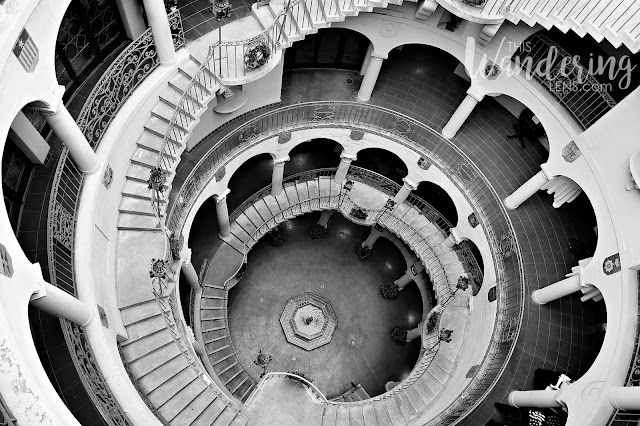 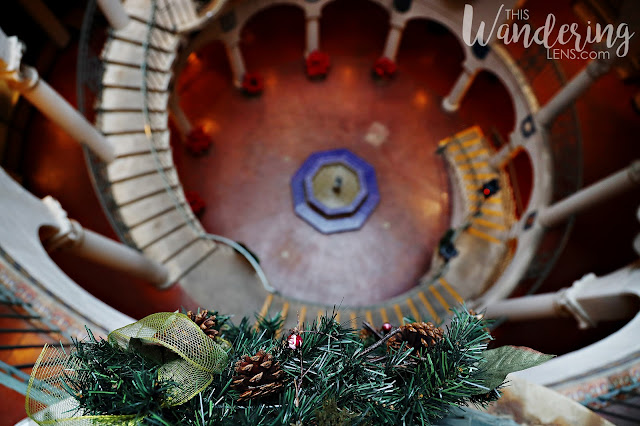 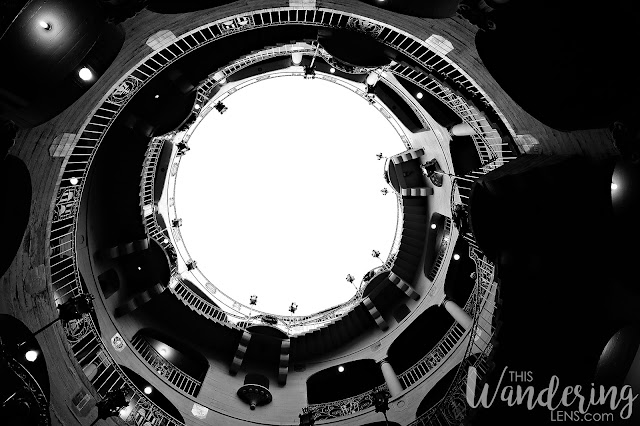 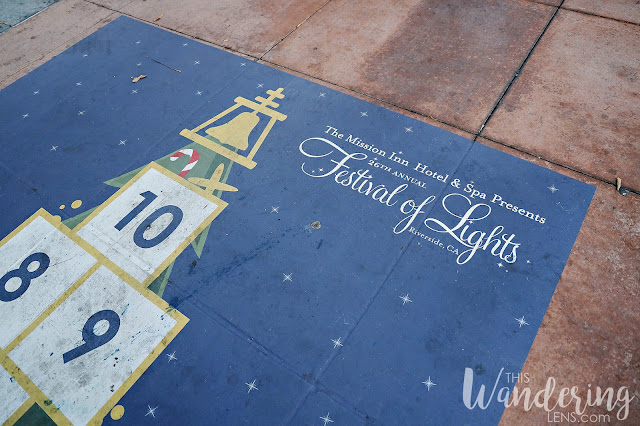 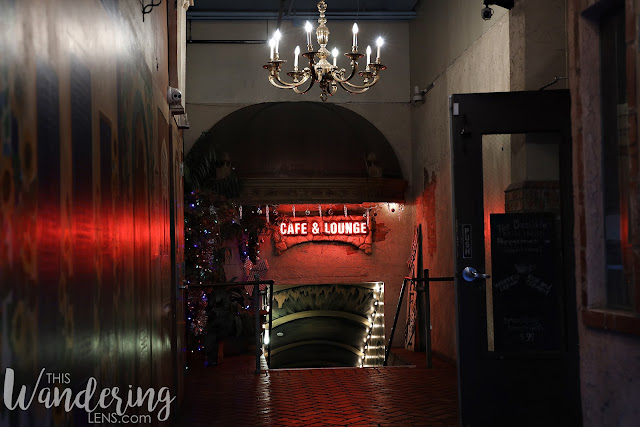 Once the lights come on, there are TONS of people waking in front of the hotel.  My aspirations to do a long exposure were dwindling.   I decided to do it anyway since I had gone through so much trouble of getting to the rotunda. 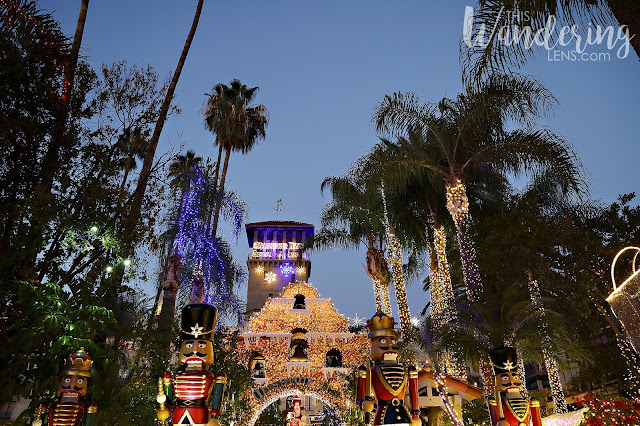 Even a 25 second exposure couldn't get rid of the people taking photos and walking by continuously in front of the hotel. 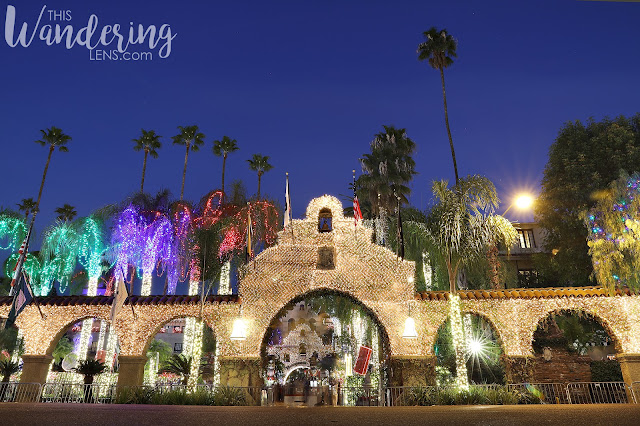 This side of the hotel was completely calm.  It's not as picturesque as the front, but you definitely can get some people-free shots on this side. 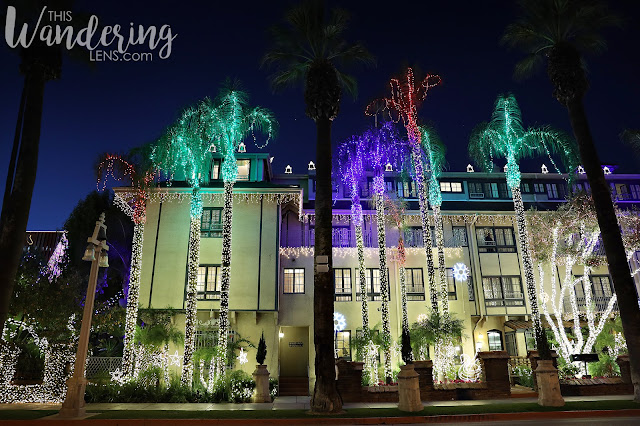 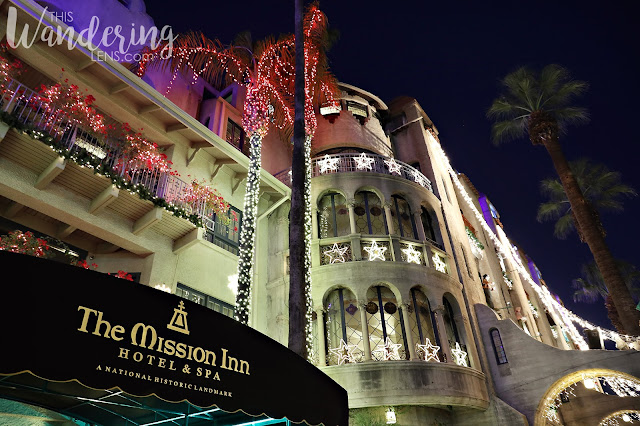 There are a bunch of food vendors, and a lot of photo ops here.  The event is busy, yet not overly crowded.  If you want to do a walk through of the Mission Inn decorations, there is a line that forms in front of the hotel, and they let people do a walk through of the hotel decorations.  I'm pretty sure they do it this way to prevent random people from just wandering the hotel. 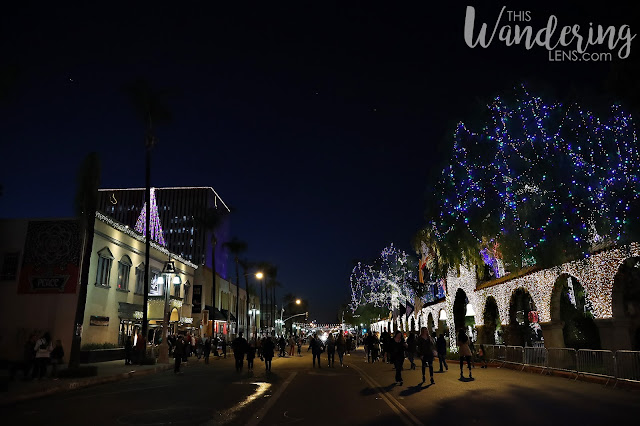 I liked the purple light in this alley.  I wish the guy smoking on the right would've stayed in the frame more.  I think he thought he was doing me a favor by getting out of the photo, but I think it would've been cool to have him smoking in the frame a little more. 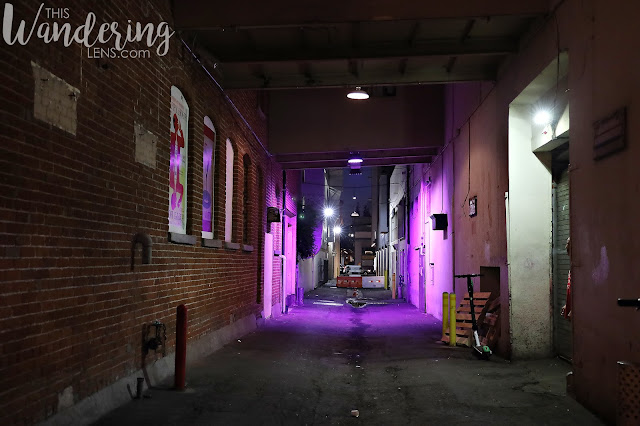 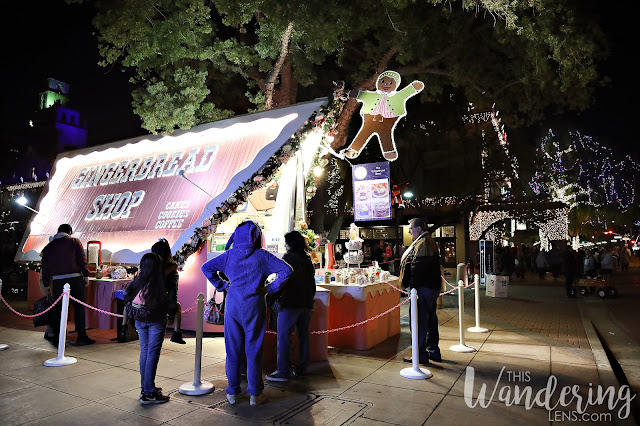 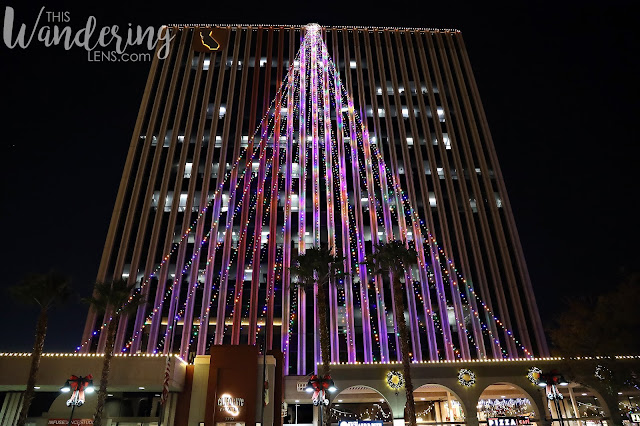 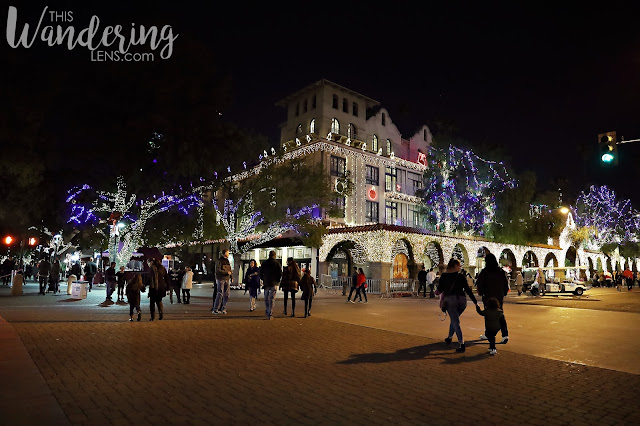 The almonds and cashews from this stand are pretty good. 😋 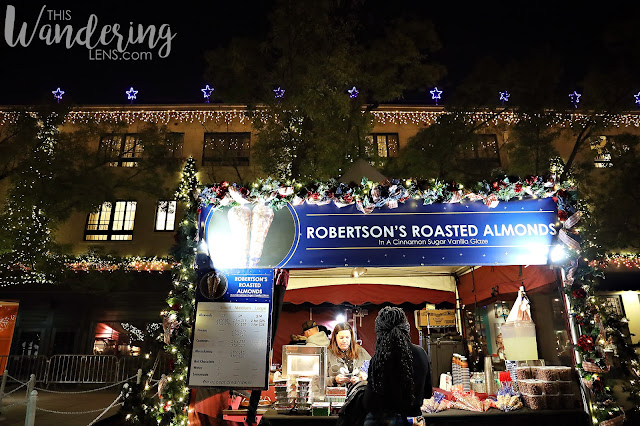 There is this place called the Hideaway Cafe where you can get hot cocoa for $1.  It's located underground, below this huge antique shop (that you could peruse for hours by the way).  There are a bunch of signs advertising this $1 hot cocoa.  Be careful though.  When you walk down the stairs that lead to this, it's very dark and I almost faceplanted with my camera. 😬 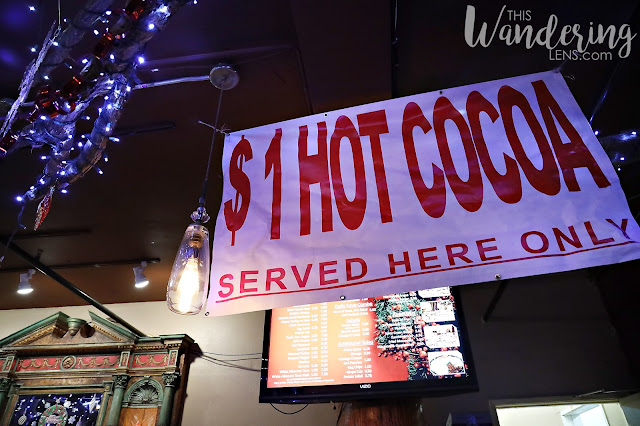 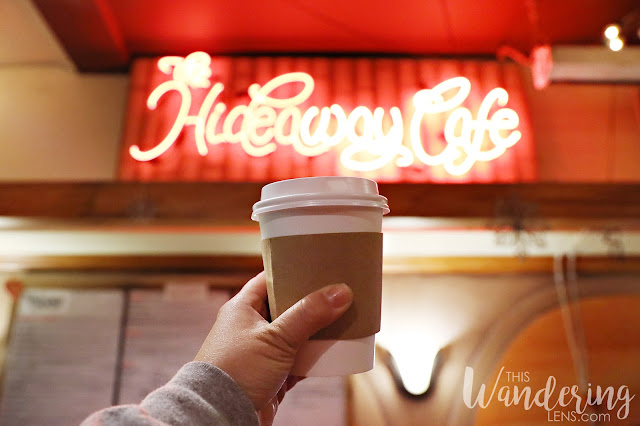 If you're looking for a place to get into the Christmas spirit, the Festival of Lights will definitely get you there.  The Festival continues until the first week of January, so there's still time to check it out.  It's very family friendly, and plenty of parking is available in nearby structures.  Merry Christmas, everyone! 😊 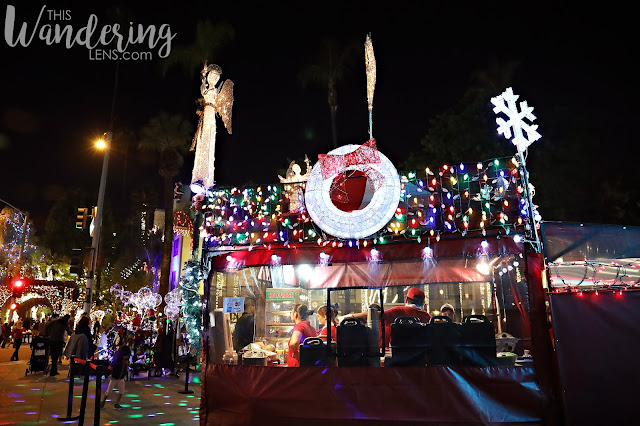 Posted by This Wandering Lens at 2:07 AM