These days, it is pretty tough to come up with something to shoot in Southern California that hasn't been done already.  I think over the last 8 or 9 years, I've been able to cover quite a bit of ground, and have even shot some places multiple times.  I recall driving around Echo Park in 2009 during the wee hours of the night, and thinking two thoughts:  1) Are my doors locked? and 2) Wow, there are some amazing views of the L.A. skyline here.  I made a note to return and shoot it at night.  However, back then Echo Park kinda had a bad reputation for being a somewhat shady neighborhood.  Of course, watching movies like "Training Day" didn't help. 😏  I decided to see if any of my photography friends wanted to shoot the view of the L.A. skyline from Echo Park Lake, and a few were down to go.

In my excitement to be out shooting somewhere (after a long stint of not shooting anything for myself), I made the mistake of making a day of it.  First, we would hit up the Obon Festival at one of the temples in Little Tokyo.  This would be an easy place to also grab a quick bite to eat as we waited for the sweltering heat to pass.  It was like a thousand degrees outside, or at least it felt like it.  On top of this, I was still riding the coattails of The Sunburn of Summer 2017, and decided wearing black pants and a navy sweater was a good idea in 90+ degree weather. 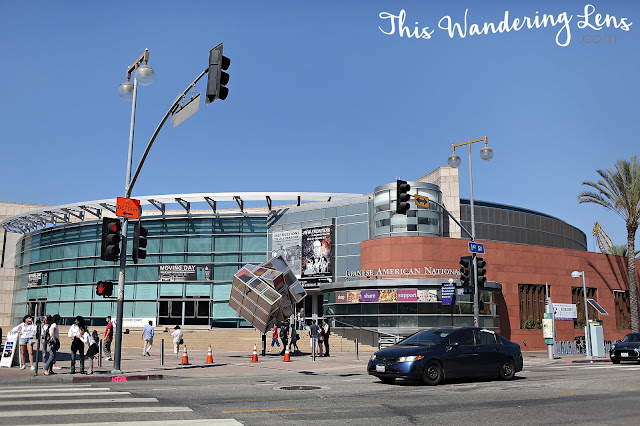 I love the artwork in this area. 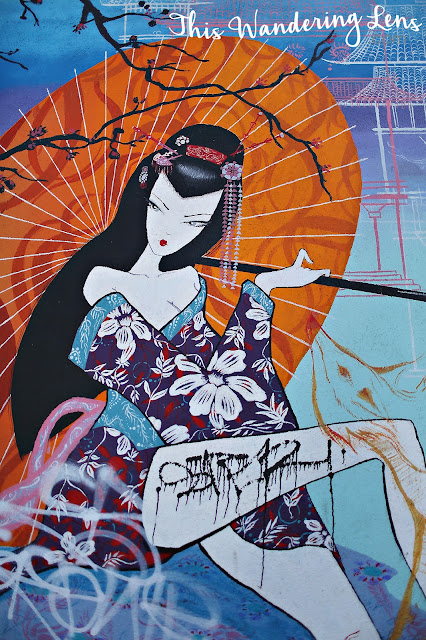 After going to all the other temples that had "higashi" written on them, we finally managed to arrive at the correct one. 😬 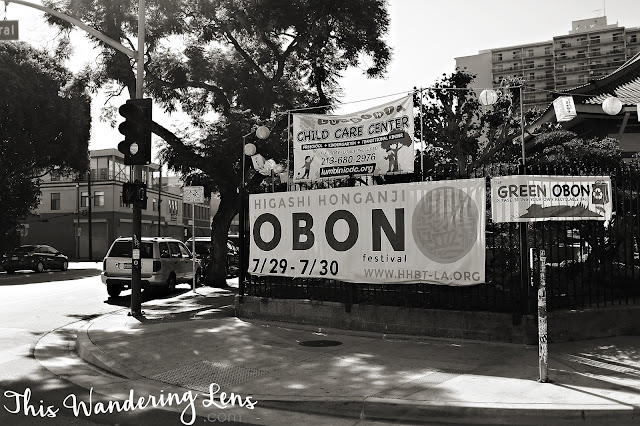 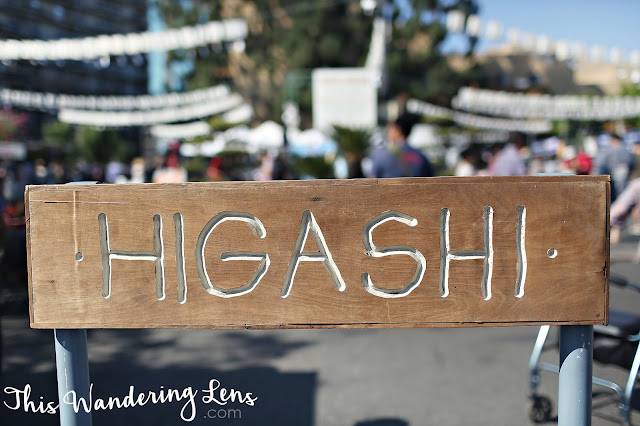 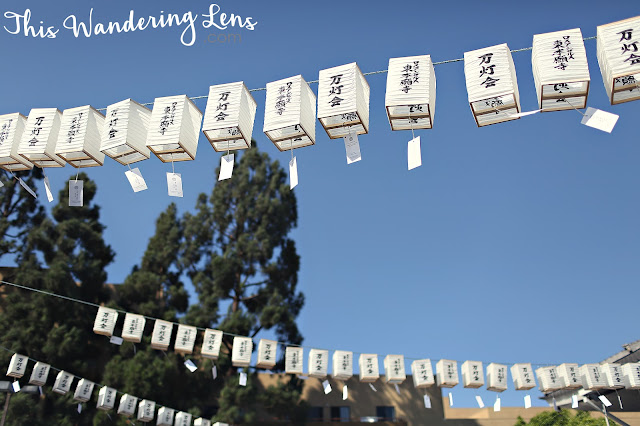 I ordered this shaved ice with green tea (that I believe they did NOT add because shouldn't it be green?!) to cool off. 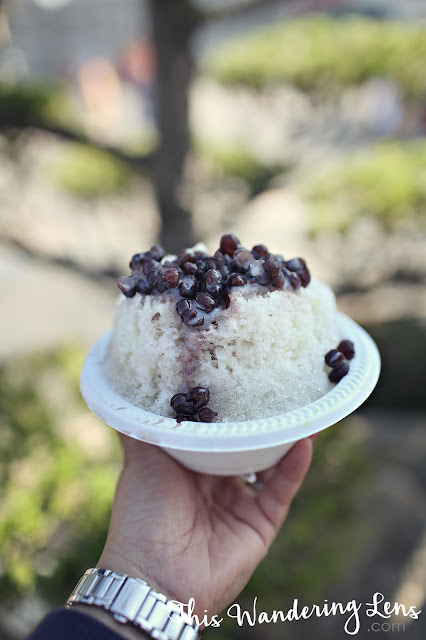 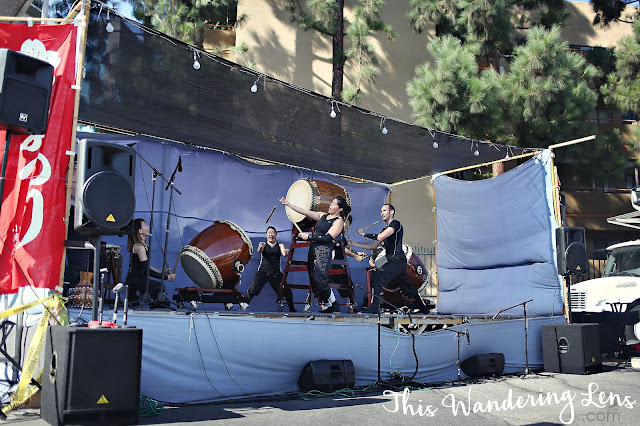 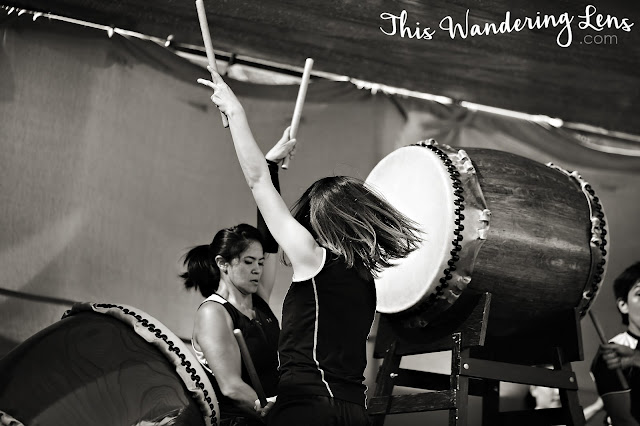 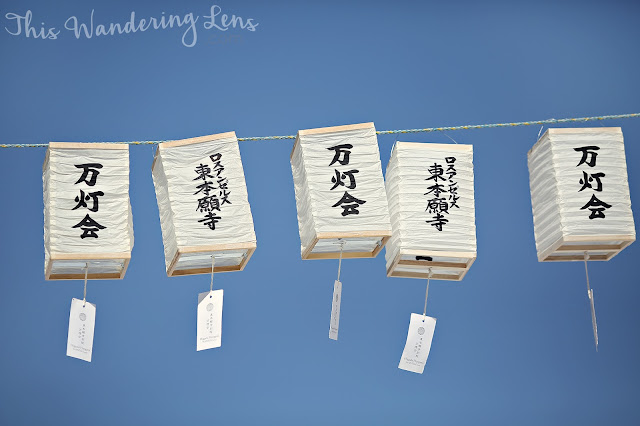 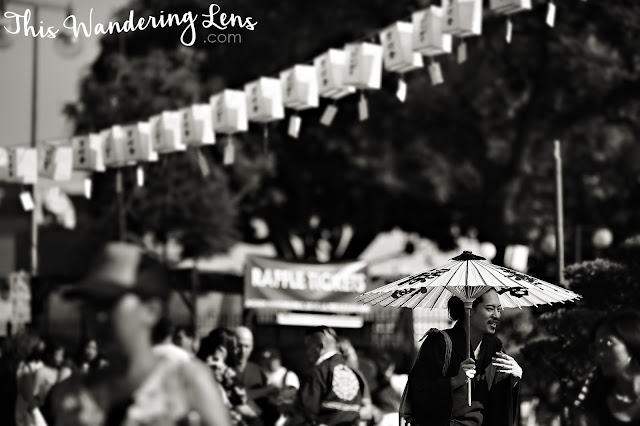 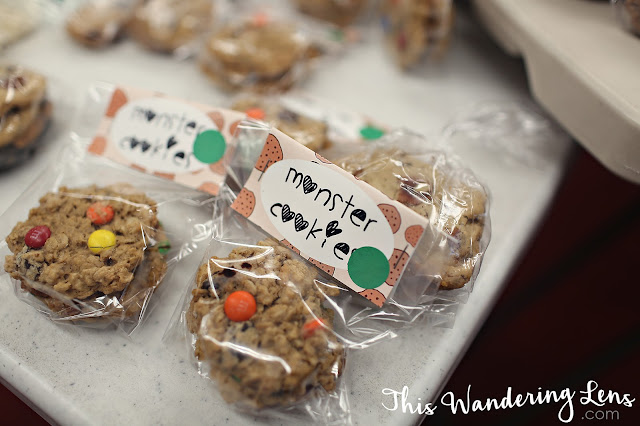 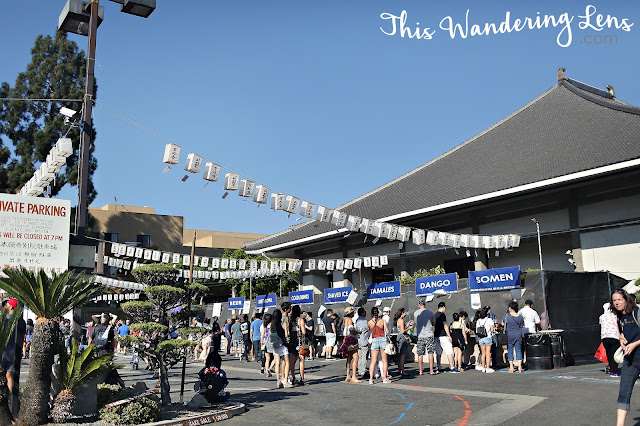 A quick bite to eat at Suehiro Cafe. 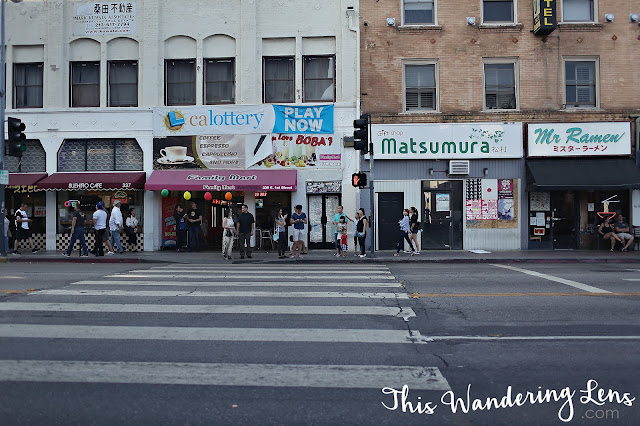 My biggest tip for anyone wanting to shoot in and around Echo Park Lake.  Do not try to park next to the lake, especially if it's the weekend.  There were absolutely NO gaps along the curb.  It was just bumper to bumper cars all the way around.  We decided to park in the neighborhood and walk a short distance to the park instead.  Make sure you read ALL THE SIGNS before you leave your car parked in any L.A. neighborhood! 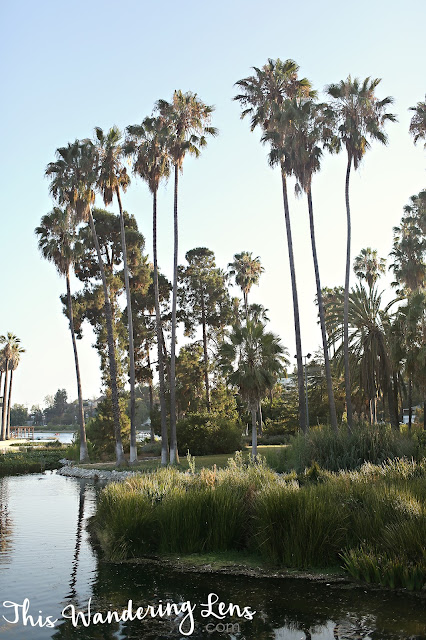 My first impression was, Wow, this place has really been cleaned up!  I know at one point, the vegetation in the lake was dying because it was so polluted.  Then they drained the lake and reintroduced new vegetation, and now it just looks really beautiful.  I also noticed tons of people out with their families and walking their dogs.  It looked nothing like what I remembered.  We found a good spot, and waited a while for blue hour.  Even at that time, it didn't feel the least bit dangerous.  Kudos to whomever started the initiative to clean this place up! 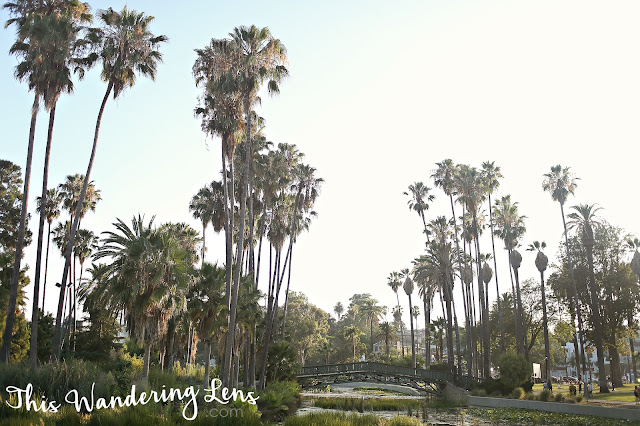 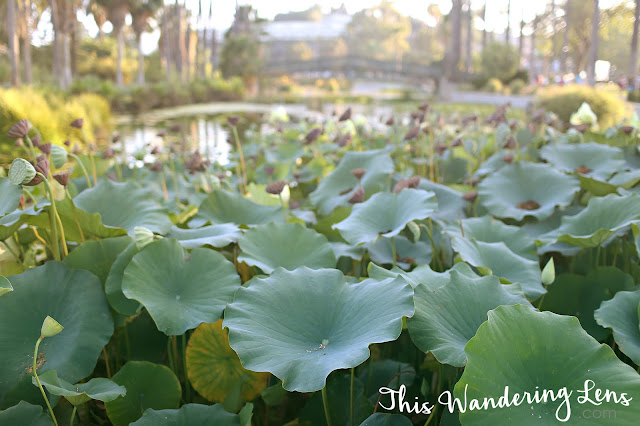 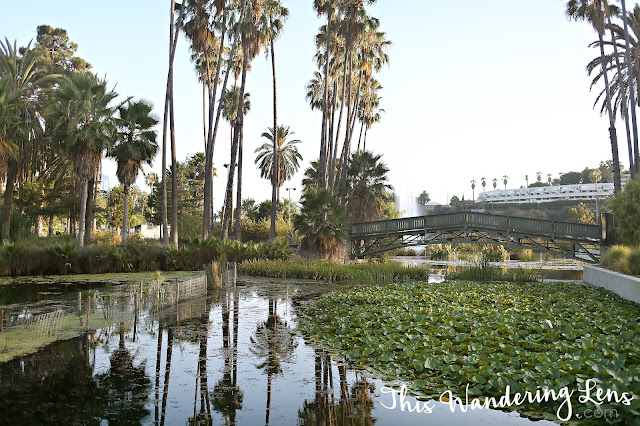 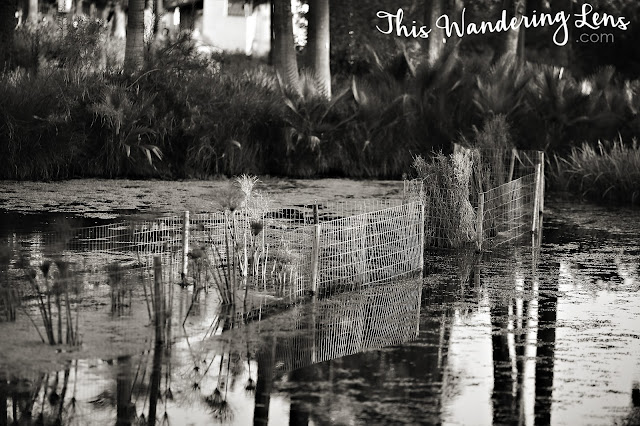 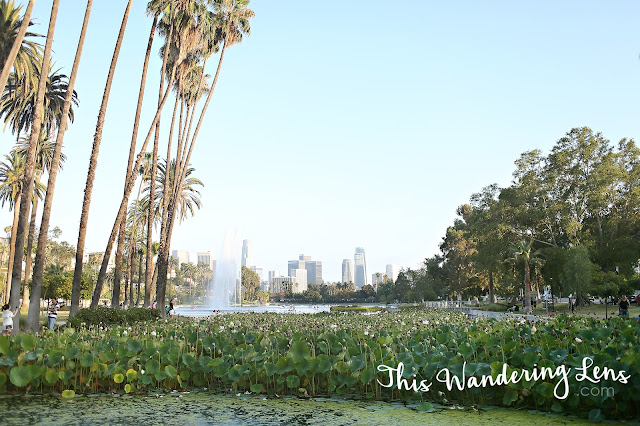 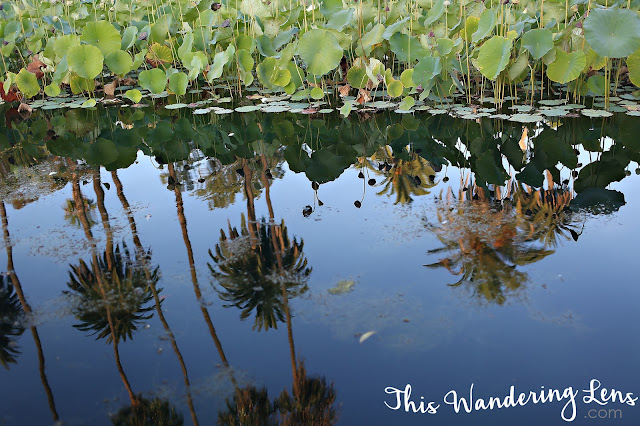 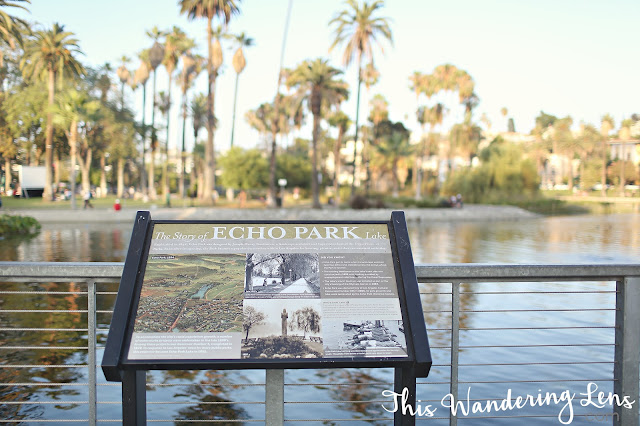 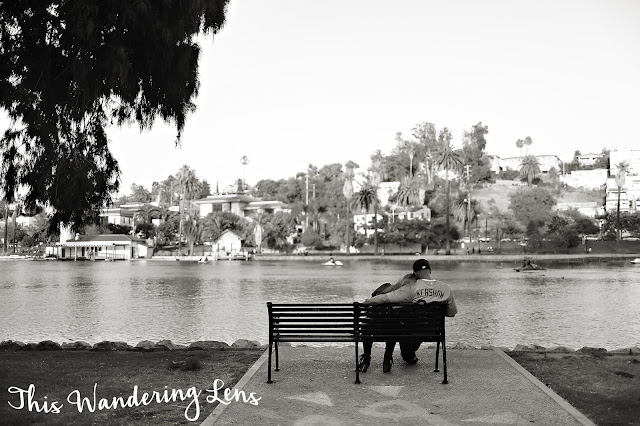 Waiting...  That's the thing with photography, particularly when you're shooting a blue hour.  There's a lot of waiting.  Make sure you bring a battery pack for your phone. 😊 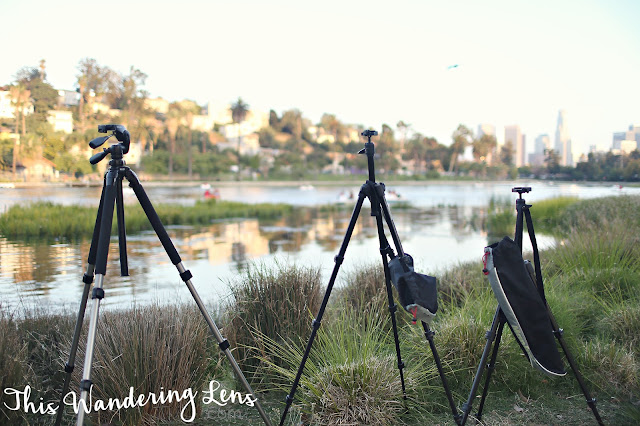 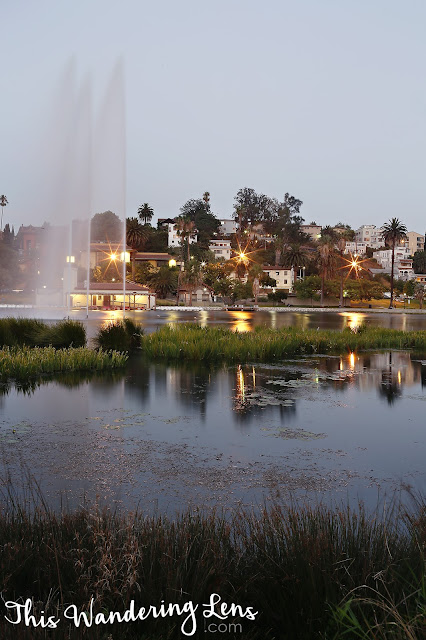 We didn't get the blue hour we were hoping for.  The sky still looked a little hazy.  On top of that, I didn't bring lenses with the best focal lengths for this.  I'm not even sure what I was thinking.  I really should've brought my 24-70mm.  I'm also lusting after an 85mm 1.8 right now, and will probably end up getting it in the not so distant future.  I used to have this lens, but sold it a long time ago.  Now I'm really seeing a need for this focal length in my arsenal.

I really wanted to get closer to the buildings. 😢😢😢 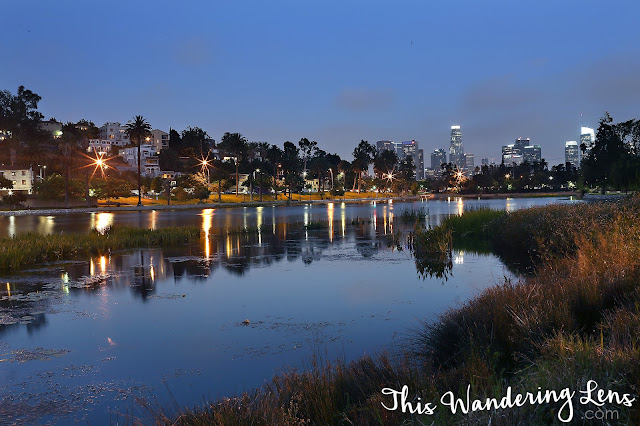 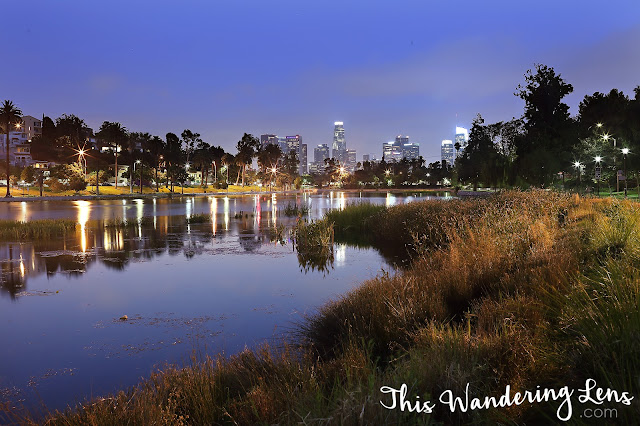 So if you're looking to shoot here, be rest assured it is safe (even though you should always exercise caution and common sense)!  If you've got any ideas for where to get the best long exposures of downtown L.A., I'd love to hear them! 😊  And yes, I discovered that I can insert emojis in my blog posts! 😯
Posted by This Wandering Lens at 10:17 PM No comments: