These days, it's pretty tough to log into Facebook and not see all the videos that have gone "viral".  There's a lot of variety - from the ones that make you outraged to the ones that warm your heart.  My favorite of these videos are the ones that involve food.

In this digital age, it's not uncommon for a business to experience a surge in clientele simply from a video or review of their establishment going viral on the internet.  I fell victim to this when a few months ago, I saw a video about a place in Anaheim Hills, CA that was serving up "unicorn hot chocolate".  Some characteristics that help food-based items go viral are:  1) it is a novelty and 2) it's Instagrammable (aka it looks good in photos).  The unicorn hot chocolate had both of these cornered, so within days, I head on over to give it a try.  When I finally had it in front of me, I took some cute photos of it, took a sip, and was immediately let down.  All the high hopes of drinking this magical warm concoction pretty much went down the drain when I realized it was just strawberry milk with colorful marshmallows and sprinkles.

In honor of this viral food phenomenon, I've decided to do a regular series called "See Soupy Eat".  The title speaks for itself.  You get to see what I've tried, and I'll give you my take on these popular foods.  Clearly the pro for me is that I get to eat. :)  Think of it as my own personal version of Yelp for food I've decided to try.

First up, the cremia ice cream at Creme (3726 W. 6th Street, Los Angeles, CA) in Korea town in downtown Los Angeles.  This little hole in the wall place is just a few blocks from the Wilshire/Western stop on the Purple Line.  If you're not paying attention, you'll walk right by it.  The storefront facing 6th street is barely noticeable, with no sign indicating you've arrived.  Only if you look closely at the dark, tinted windows will you see a small sign that says Creme.  Once you go inside, it's a modern looking dessert and coffee shop with minimalist furniture and mid-century modern chairs. 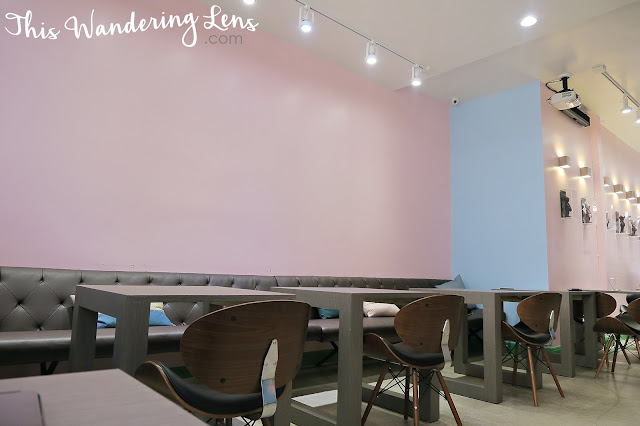 At $6.50 per cone, this stuff is pretty pricey for what it is.  It was soft and creamy, and the video I saw on Facebook claimed that it was the only place you could get cremia outside of Japan.  My friends who've been to Japan said they loved it, but since I haven't been there, I have nothing to compare it to.  It'a basically a light, creamy soft serve that isn't too sweet and sprinkled with chocolate, strawberry, or green tea powder.  It comes in a crispy cone that also has a mild almond flavor.  I liked it...but I don't know if I would pay $6.50 for it again.  It's definitely worth trying once if you're curious, though. 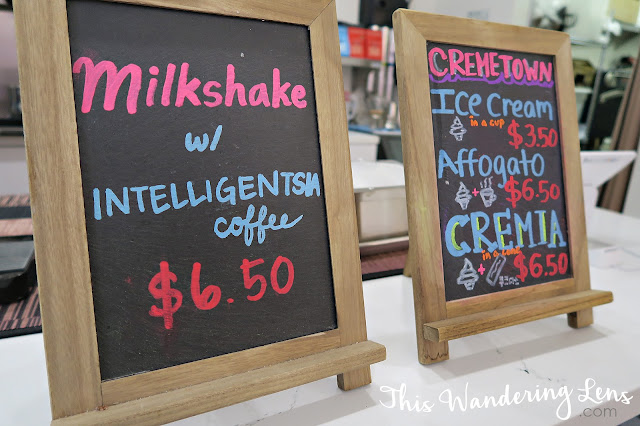 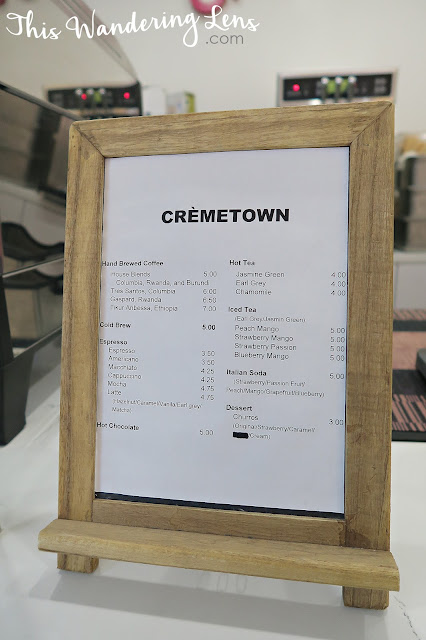 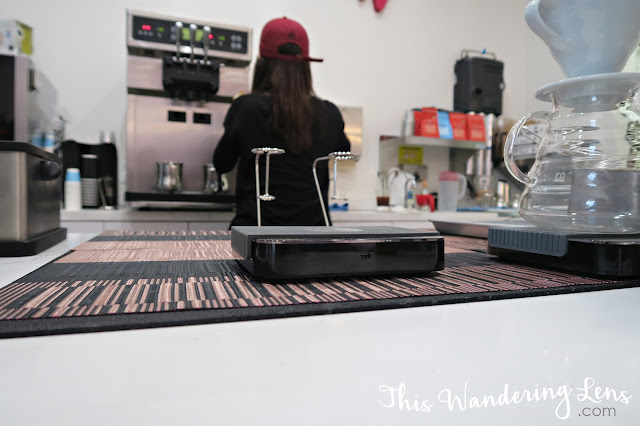 I tried the green tea and strawberry powder.  Honestly, neither powder had that strong of a flavor. 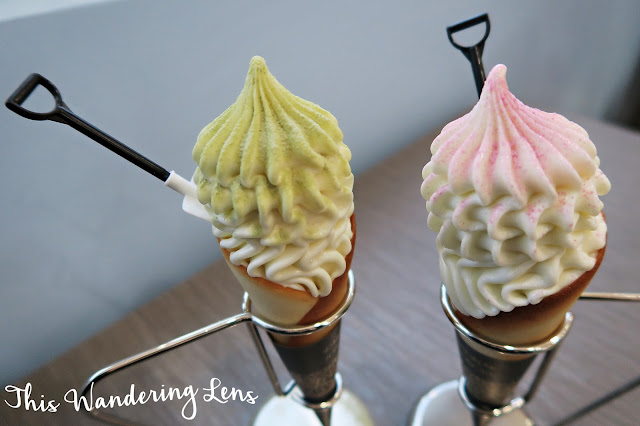 They give you these miniature shovels to eat it with.  I thought that was a nice touch. 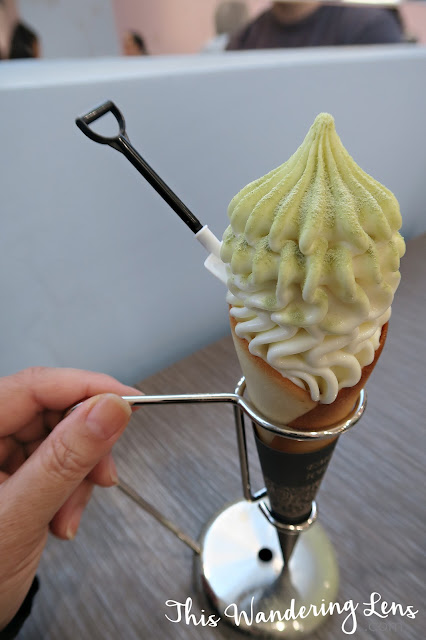 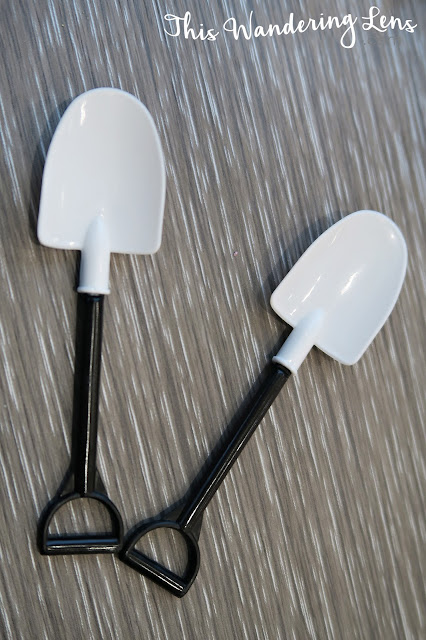 One of my friends kept mentioning this place called Savoy Kitchen (138 E. Valley Blvd.)  in Alhambra, CA.  Apparently, it has a reputation for being one of the best places in SoCal (some people even consider it the best in the nation) for Hainan chicken.  It's a dish from Singapore that originates from the Hainan province in southern China. It consists of poached chicken, rice that's been cooked in chicken broth, and sauce for dipping.  The one served at Savoy Kitchen came with ginger-scallion, garlic-chili, and dark soy dipping sauces.

We arrived right after they opened at 11:00am on a Saturday.  The place was already brimming with people.  Luckily, we were seated outside within 5 minutes of getting there.  We all had the Hainan chicken, of course, along with the lemon iced tea.  The prices were very reasonable.  The Hainan chicken plate was around $8.50 (and two dollars extra if you want dark meat).  You can drink unlimited refills of the lemon iced tea for around $2. 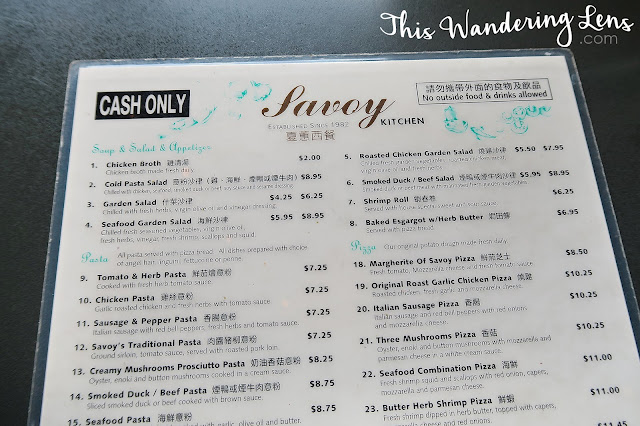 They had this sugar syrup you could add to your tea.  I think we consumed more than our recommended daily allowance of sugar that day.  It was so easy just to keep pouring since under normal circumstances, you'd add sugar in granule form.  It was easy to lose track with this. :) 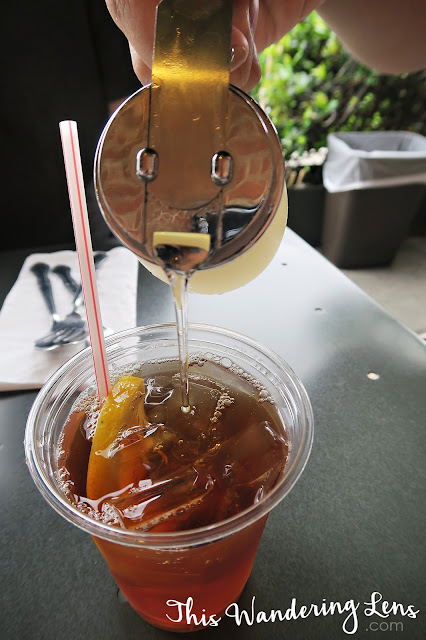 When the chicken arrived, the presentation was nice and clean.  It doesn't look like anything special, but after you dip the chicken in the sauces, it does taste quite good.  My friend who suggested this place said some YouTubers tried out Savoy and said the Hainan chicken was a "flavor explosion".  I don't know if I'd use these words to describe it.  I was good, but a flavor explosion it was not.  I'd best describe it as a simple meal that feels like the Asian version of "comfort food".  I thought the chicken was tender, and the rice was moist and flavorful.  The dipping sauces were a good compliment.  I didn't care too much for the side salad, but it tasted okay. 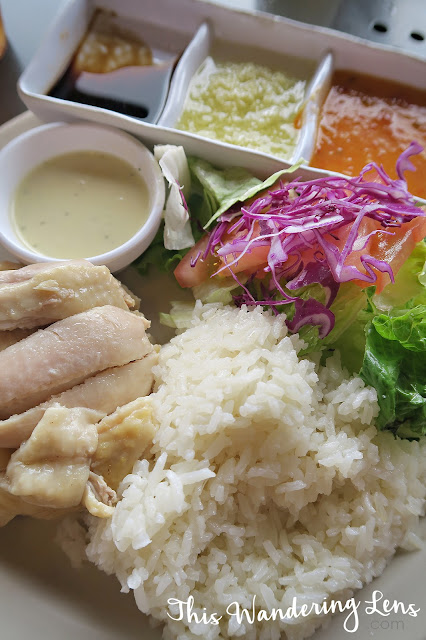 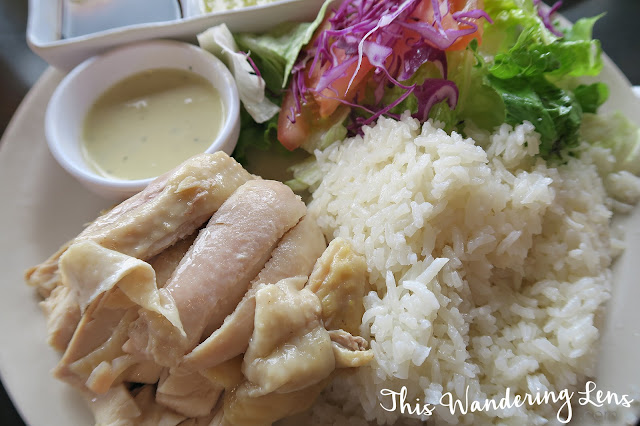 I ordered the $2 creme brulee...because who sells creme brulee for $2?!?!  Well, at this price, we were not surprised to learn that they had sold out of the creme brulee - and that I was getting the LAST ONE!  I agreed to share my good fortune hahahaha.... It was good, but I wouldn't say it was the best creme brulee I've ever had.  I thought it was too thick, and I prefer mine to be somewhat soft.  Honestly, I was still hung up on how they sold out of creme brulee when I placed my order at 11:15am!

Overall, I really enjoyed the Hainan chicken.  The service at Savoy Kitchen was quick and friendly.  Again, I have nothing to compare it to (not to mention everyone's tastebuds are different), but this dish is definitely worth trying and a total steal for $8.50! 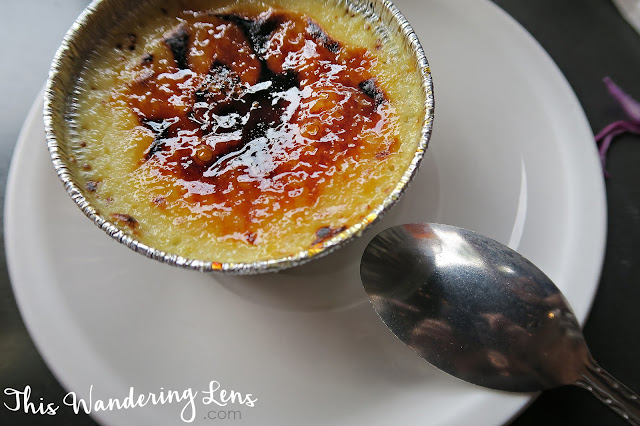 Paderia Bakehouse Malasadas (3 out of 5 stars)

I discovered this place from a friend's Instagram post.  The main staples of Paderia Bakehouse (18279 Brookhurst Street Suite #1) in Fountain Valley, CA  are its specialty malasadas.  When most people think of malasadas, they think of Leonard's Bakery (on the Hawaiian island of Oahu).  A visit to Paderia Bakery will cost you a lot less, though.  I've actually had the malasadas at Leonard's several times and have sampled all the varieties they sell, so I'll be able to give you a comparison of the two.

I love the decor at Paderia.  Once you get over all the cute modern industrial decor, you'll gawk at the prices of their bakery items.  It. Is. Not. Cheap!  The Yelp reviews I read were filled with people raving over the cookies.  If you look closely at the picture below, the cookies are a whopping $4!  The oatmeal comes in at a steal for $2.25.  For that price, I expected the cookies to be HUGE.  They were NOT. 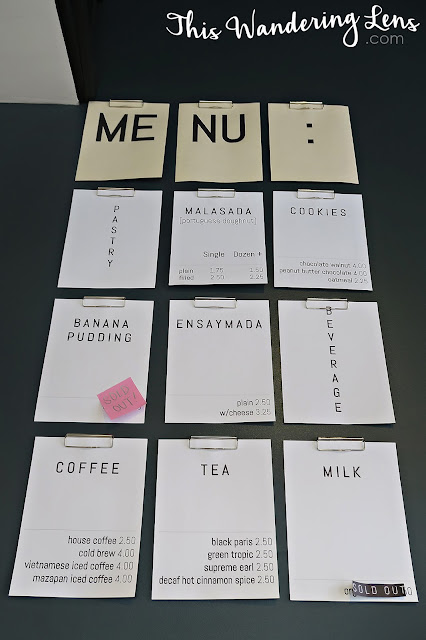 NOTE:  They sold out of MILK.  Who sells out of milk on a Saturday morning just 30 minutes after opening???

I couldn't bring myself to spend my hard-earned cash on these highway robbery cookies, so I couldn't tell you if they were every bit as mind-blowing as the Yelp reviews said they were.  I can, however, offer you this photo of them.  They are regular-sized cookies at jumbo-sized prices. 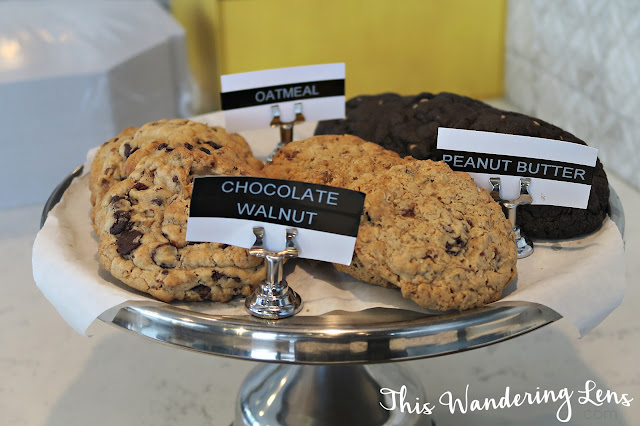 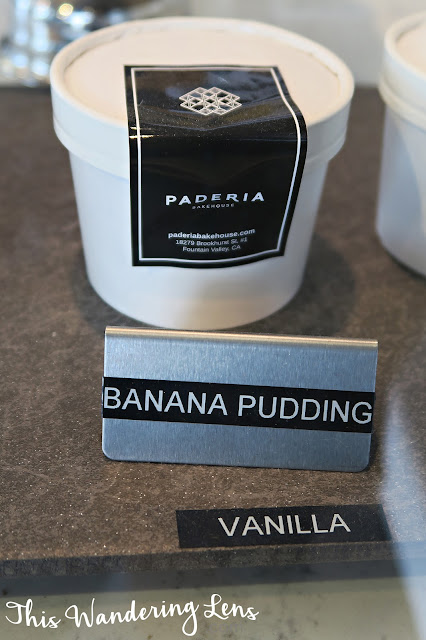 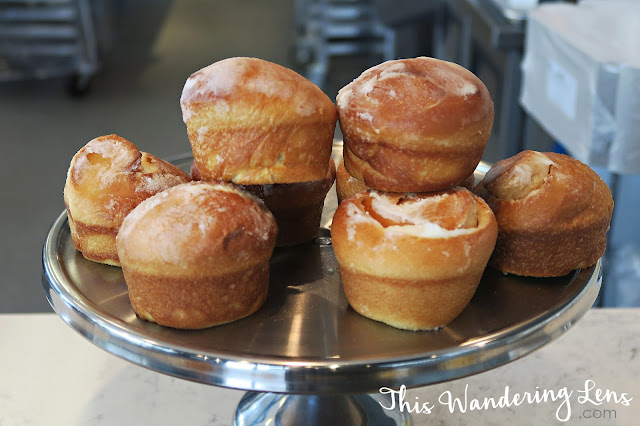 For about $15, I got 7 malasadas (original sugar, cinnamon & sugar, nutella-filled, and coconut-filled).  These are like the fancier (and more expensive) version of Leonard's malasadas.  They are light and fluffy, and you can tell at first bite that they use the freshest ingredients to make these.  My favorite were the coconut and Nutella malasadas.  While I enjoyed these flavors, they were too fancy for something that should be simple.  I'd definitely have these again if I were in the mood to treat myself.  Heck, maybe one day I'll even spring for those $4 cookies!  As much as I enjoyed the malasadas, I couldn't help but think the prices were a bit ridiculous (no matter how good any of it is).  For this reason, I don't see myself frequenting Paderia.  If you take away the plane ticket you'd have to buy, Leonard's wins hands down based on taste and value. 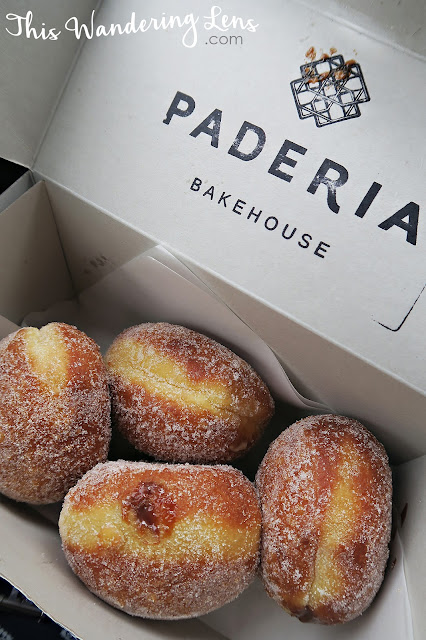 Hopefully you've enjoyed this first installment of "See Soupy Eat".  I have a couple of things on my "to try" list.  Got any suggestions?  Leave them below! :)

Posted by This Wandering Lens at 9:22 AM 2 comments: