Back in September (yes, I know that was a long time ago), the Canon Experience Center was hosting an event for their new EOS R mirrorless camera.  I wasn't in the market for a mirrorless camera at that time, and honestly, never really gave it serious thought.  I had just gotten my 6d Mark II, and was happily shooting with it.  I struggled to find a suitable title for this blog post, and a friend suggested I come up with something that really grabs people's attention, and what better title to grab people's attention with than one that insults all the camera bashers out there who probably spend more time on threads bashing cameras than out taking photos? 😏

Anyway, back to the EOS R.  The only reason I went to this event was to be able to actually see and use the camera.  I knew very little about it, and figured this was a good opportunity to use it before having an opinion on it.  What I knew going into this was that the EOS R got a lot of hate for it's cropped 4k video and lack of dual card slots.  Since I'm not and never was an avid video shooter, my main interest in the EOS R was its image quality.  I'm currently shooting with a 5d Mark III and 6d Mark II, and because I am happy with the image quality of these cameras, I wanted to see how the EOS R images would compare.

Mistakenly, I thought it would be as easy as arriving and testing out the camera.  Luck would not be on my side, as I had to sit through a little over an hour's worth of tech talk and a short lecture from a photographer who shoots commercials about his experience shooting with the EOS R.  Even though I learned a lot of tech-y things and enjoyed the slide show, nothing beats actually using the camera yourself to take photos.  For me, shooting style is very personal and specific to each photographer.  I wanted to see how the EOS R felt in my hands, and how intuitive the buttons and dials were.  Once we were set free, they had a bunch of EOS R cameras for people to shoot with their own memory cards as well as different stations set up with models or simply to ask a Canon rep about the camera.

One of the things that I didn't like was the line of people waiting to use the camera and new RF lenses.  I definitely felt the pressure to hurry up and take some shots before letting someone else have their turn.  All the following photos were taken with the EOS R and the RF 24-105 f4L or RF 50mm f1.2L lenses. 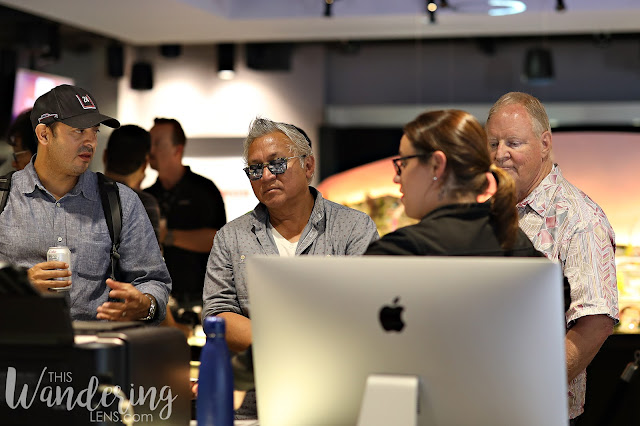 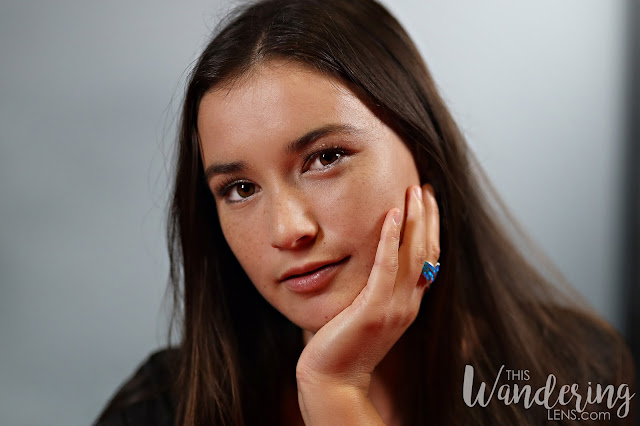 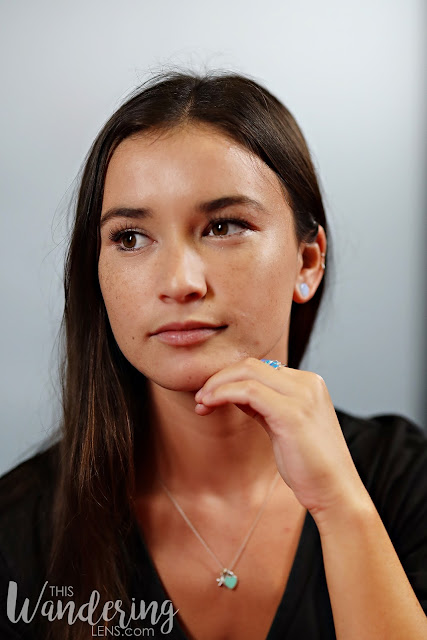 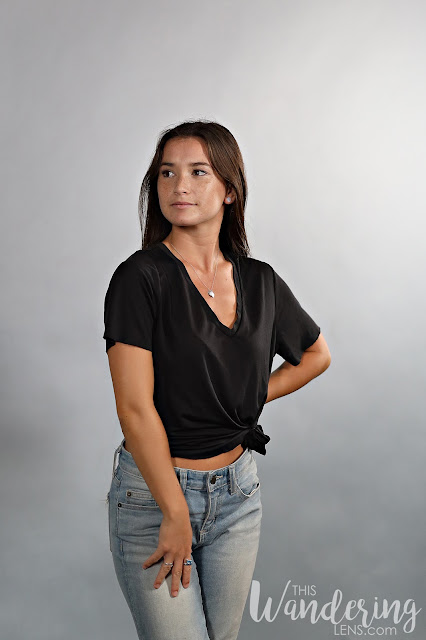 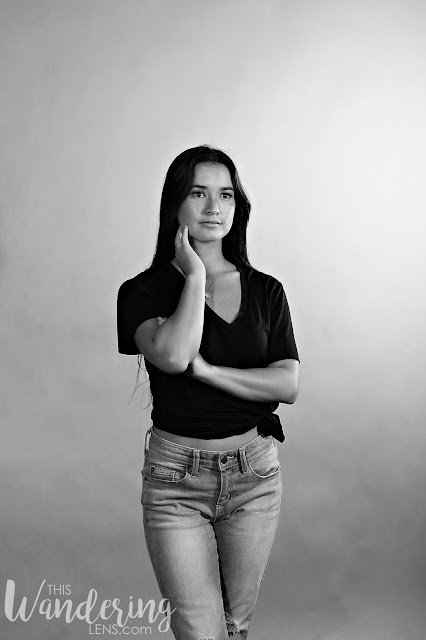 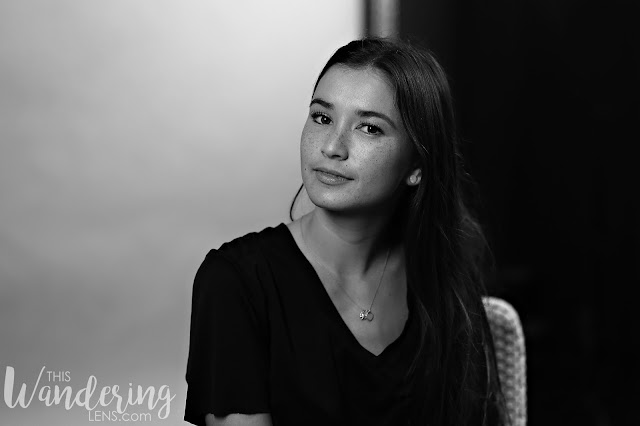 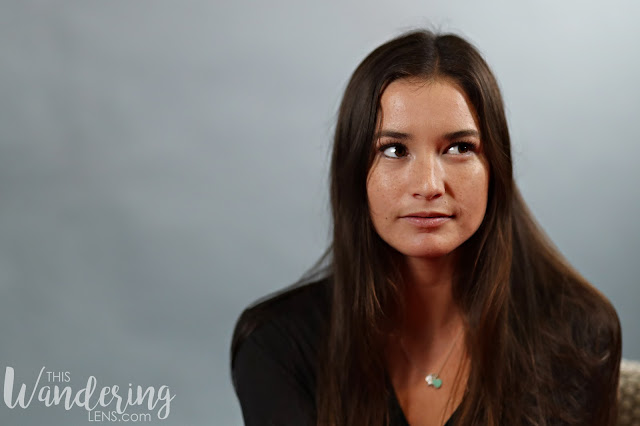 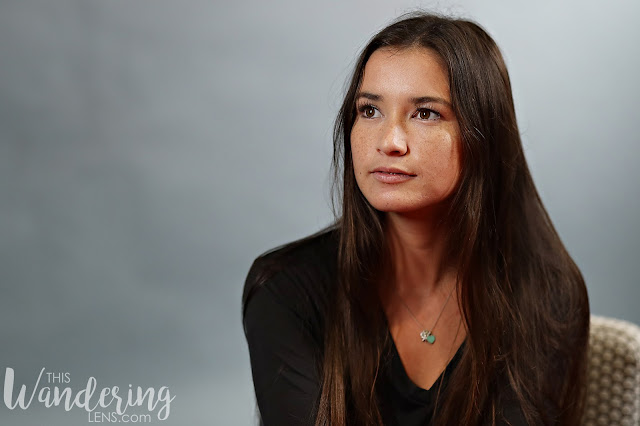 Hey, did I mention they had tons of food and drinks there?  Yeah, that was pretty awesome!  I made a mental note to self to go to more Canon events in the future. 😊 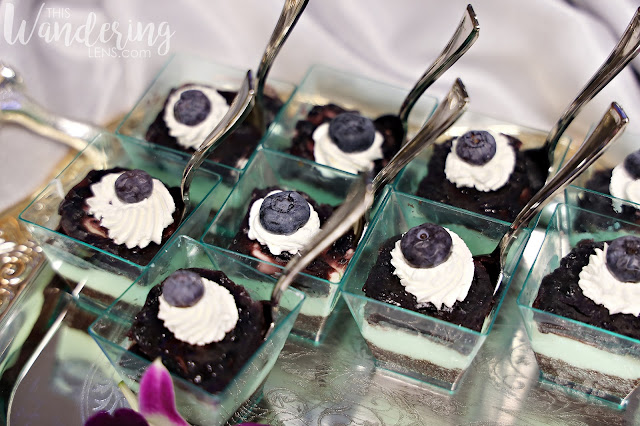 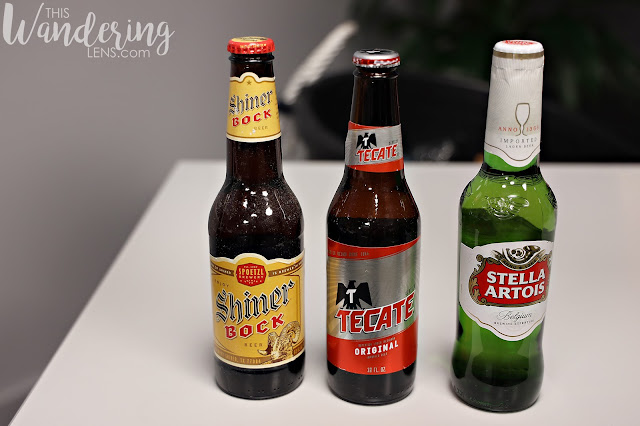 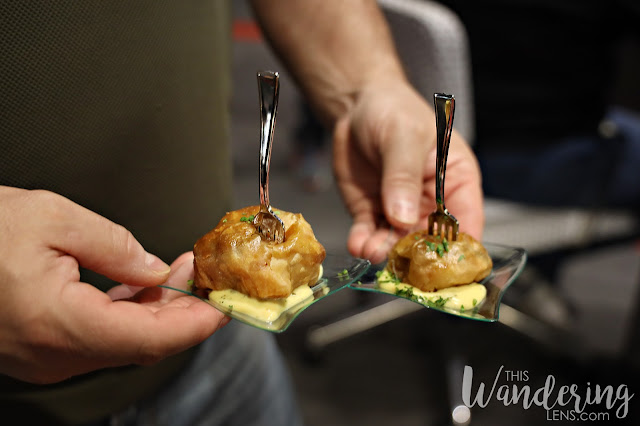 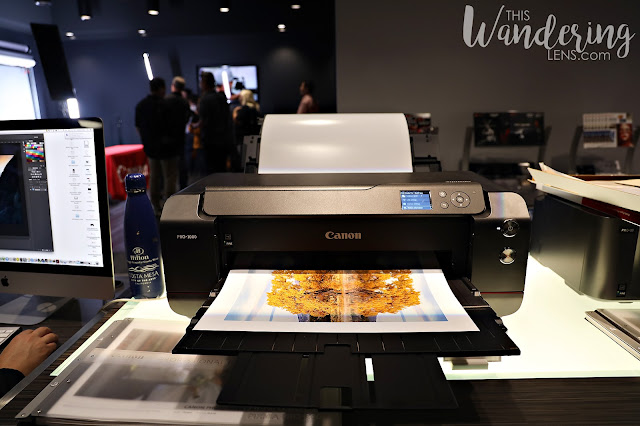 After taking some shots, I took my memory card out, grabbed some more food, and headed home.  When I finally was able to look at the images, I was pretty pleased with the image quality - especially considering they were taken in low light.  Like I said, I did not have plans to buy this camera, but I was curious enough about it to go back to the Canon Experience Center one more time (this time without the crowd) to use the EOS R again.  I don't know if they would actually let you leave the building with the camera, and I didn't think to ask.  I just took photos of whatever was inside, and those of you who have been there know that while it looks nice from a technical standpoint, there isn't much to take photos of so I had to settle for their little train set up. 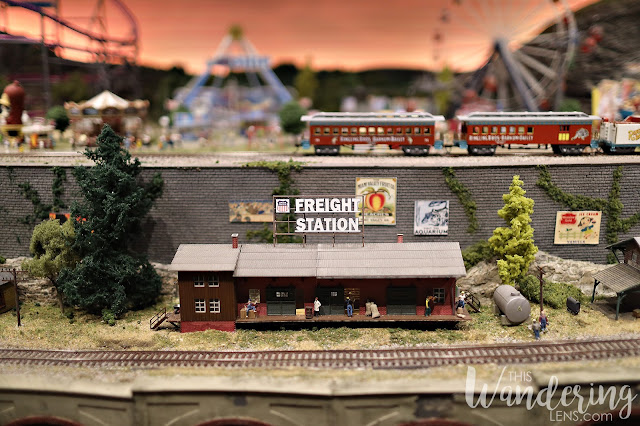 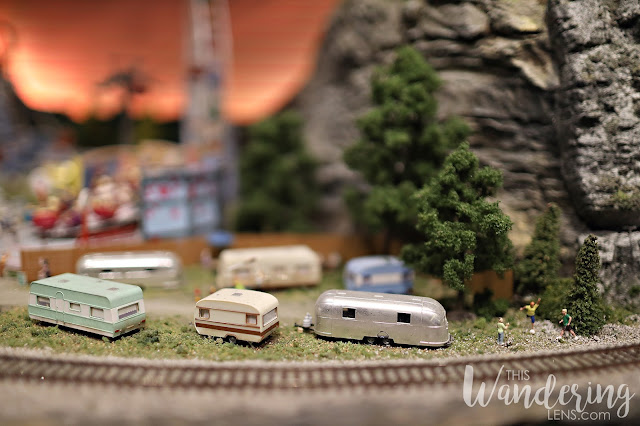 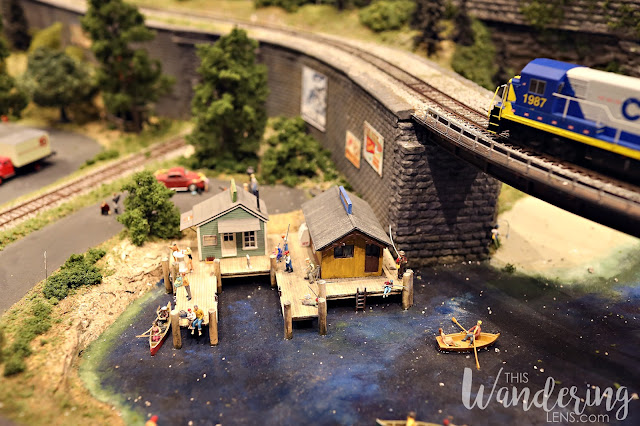 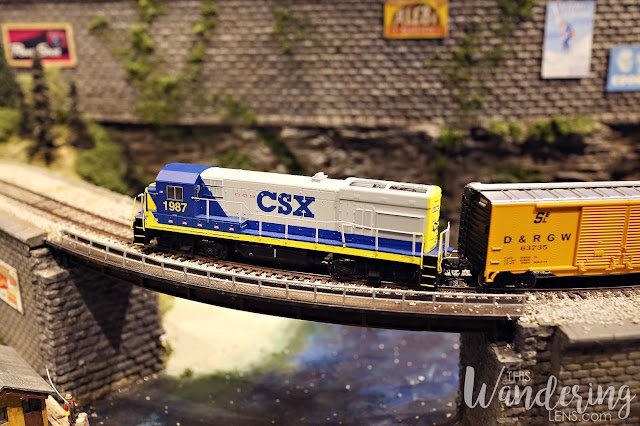 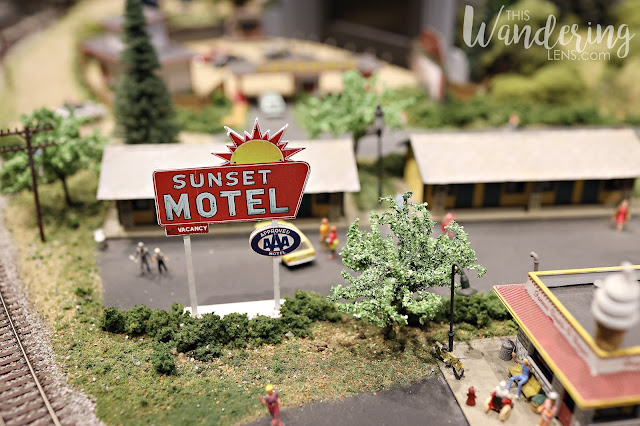 Here's the 5d Mark IV next to the EOS R.  This picture makes their size difference look a lot bigger than it really is.  While smaller and slightly lighter, the EOS R isn't as compact as its competitors. 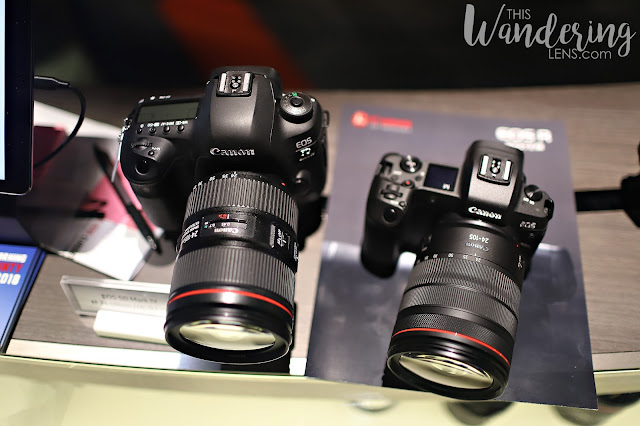 So what did I think of the camera?  Well, let's put aside that the video was not a factor since I don't shoot video.  While I also didn't like the lack of dual memory card slots, it was something I could live without since I wouldn't be considering the EOS R for use in my professional work.  One of the Canon reps placed the EOS R as a bridge between the 6d Mark II and the 5d Mark IV, and I thought that was a fair statement.  The camera isn't marketed to be used for professional work, even though it certainly can produce it.  Here are the pros and cons I took away from using the EOS R twice:

1) Faster focusing - I definitely saw a difference in focusing compared to my Mark III and 6d Mark II, no doubt due to the thousands of focus points in the EOS R.

2) Size and weight - I kinda enjoyed the smaller size and weight.  Despite it being larger than I expected, the camera still felt good in my hands and I found shooting with it quite an easy transition.

3) Touch and drag focusing - I thought this was weird at first, but got used to it over time.  Basically, you can change the focus point via a button (which takes more time), by tapping anywhere on the LCD screen, or by touching and dragging your finger on the screen to move the focus point.  You can even designate the drag area to different parts of the screen.

4)  The new RF lenses - Canon makes top notch lenses, and the new RF lenses are no exception.  The introduction of the new function ring is also intriguing.  You can designate it to change just about any of the camera functions.

5)  Image quality -  Hands down the number one thing I look for is image quality and the EOS R did not disappoint.  I found the images to be on par with the 5d and had more clarity than the 6d mark II.  I know there are people who pixel peep and will come up with their criticisms, but honestly, unless you are shooting for National Geographic, people need to just chill the F out about that.

2)  Size - I do wish it was a TAD smaller.  However, I wonder if I'd still enjoy shooting with it if it were a much more compact camera.

3)  Pricey lenses -  Yes, you can buy a $99 adapter (or their control ring adapter mount or their yet to be released drop in filter adapter mounts) and use all your EF and EF-S lenses with the EOS R, but if you plan on buying the new RF lenses, be prepared to shell out some major cash!  There are four new lenses, and the RF 35mm f1.8 macro is the most affordable at $499.  The RF 24-105mm f4L is very sharp and will set you back about $1,099.  The RF 50mm f1.2L is $2,299 and while being an amazing lens, is quite large!  It basically negates the smaller size of the EOS R body.  Finally, the coveted RF 28-70mm f2L lens is $2,999 and a force to be reckoned with.  Yes, it is f2 throughout the entire focal range, but the size of this lens is just ridiculous.  The filter thread size is 95mm!  I'd love to see the cost of those filters!  All this aside, I still want this lens - c'mon, it's f2!  The Canon rep justified the price to me by saying that it's like getting a great prime at every focal length from 28-70 and also a zoom lens in one.  Hey, the guy's got a good point LOL.  I'm gonna have to save my pennies for this one!

But what about all the other things people hate about the EOS R, you ask?  Well, quite honestly, those things don't matter to me.  Like I said, every photographer's shooting style is different, and  I paid attention to the features that impacted my shooting style.  Unlike a lot of the haters, I also actually used the camera before forming my opinion, and I suggest you do the same if you're considering the EOS R.  The improved focusing and Canon color that I love were present in this smaller, lighter body and that was enough to sell me.  Ha!  That's right, I bought one! More photos from the real world to come in future blog posts! 😄
Posted by This Wandering Lens at 11:04 PM