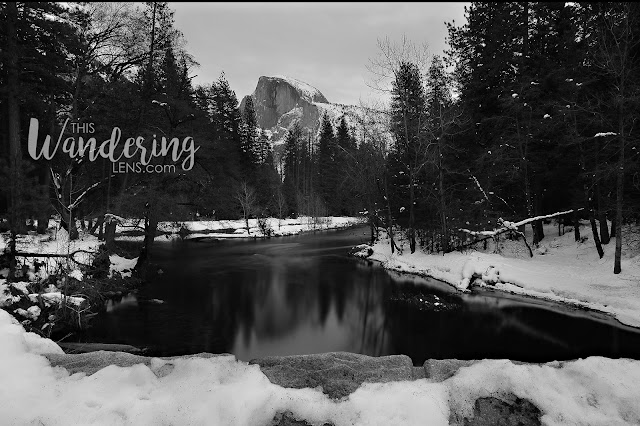 It's been about 10 years since I picked up photography as a hobby.  I am proud to report that unlike the junk that claims the space in my craft room/office (a.k.a. where hobbies go to die), I still feel as passionate about taking photos as I did when I bought my first DSLR.  Now if you're a photographer, you will understand that there's a lot of trial and error when it comes to seeking that perfect shot.  Photographers often find themselves going to places two, three, or maybe even four times before we decide that we're happy with our photos.  Growing up in the central valley, I've experienced my fair share of Yosemite National Park.  While I always thought it was beautiful, photography makes places like Yosemite even more majestic, and the photos you long to take that capture this seem even more out of reach.  About six years ago, we made a trip out to Yosemite while it was covered in snow, and it was amazing.  Well, one unexpected trip to the central valley, and one night scrolling Instagram about this phenomenon called "firefall" later, and I was able to con one of my friends into driving us there for the day.

Remember when I said I photographed Yosemite in the snow about six years ago?  Well, clearly I have aged to the point where I can't go through winding roads without feeling super ill.  If this sounds like something you can relate to, then I offer you this piece of advice.  The blue line is the road we took to tunnel view.  It is very winding, so if you're susceptible to motion sickness, then I recommend taking the yellow route instead.  One of my friends told me it really helped with her motion sickness.  While that blue route is gorgeous, it was no match for how utterly ill I felt on the drive.  Note to self:  Start packing Dramamine. 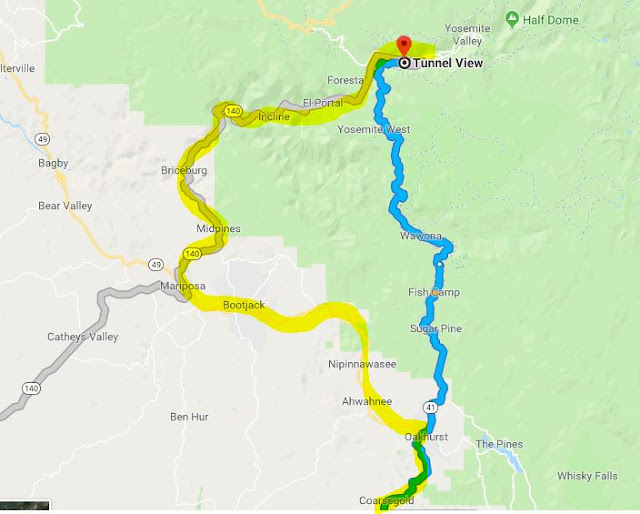 We got a pretty late start, and in retrospect, I realize that we only had about an hour or so of shooting time before sunset.  Part of the plan was to see/shoot firefall if it happened to occur on this day.  Luckily, I didn't get my hopes up because once we were in the park, it was CRAZY full of people and cars.  The park ranger at the entrance said there was something like 6,000 people in the park just there for firefall.  I thought he was exaggerating until I saw all the cars.  Then I really believed him when we couldn't find parking.  See, this is the kind of stuff you learn as you repeated go back to places to shoot, and realize each time how unprepared you are.  😑 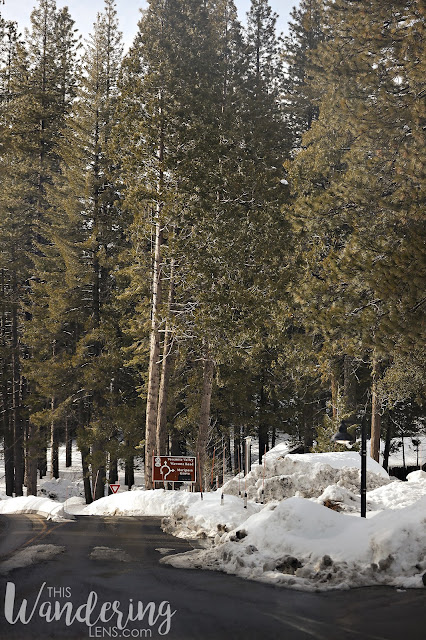 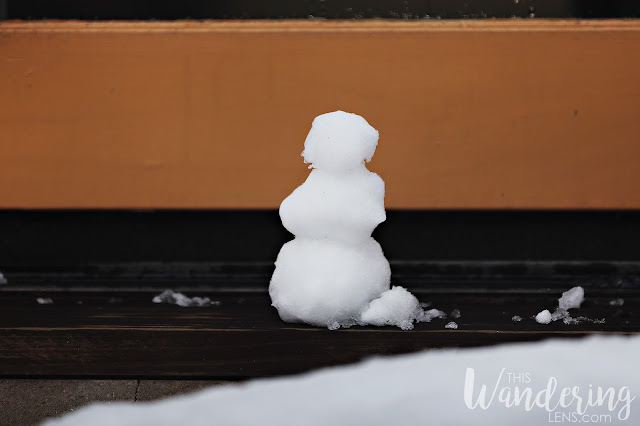 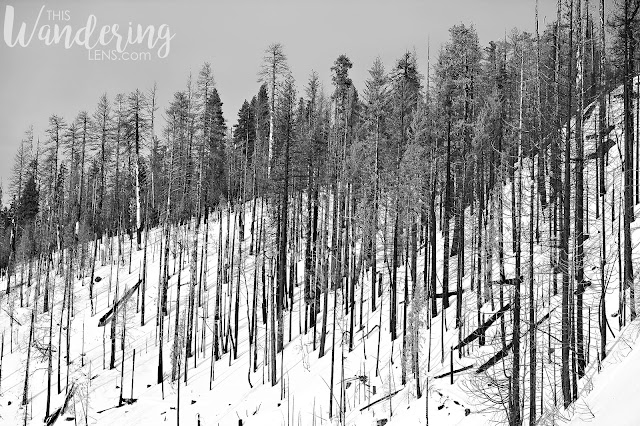 The view from tunnel view has to be one of the most impressive vantage points of the Yosemite Valley.  What you don't see in this photo are the hoards of people everywhere. 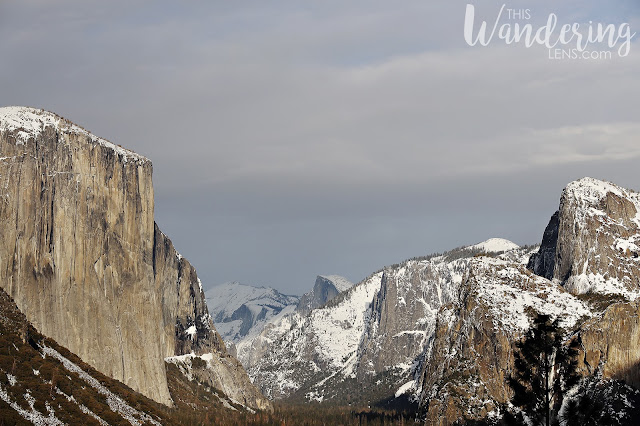 I love to refer to this as the tunnel view monster. 😜 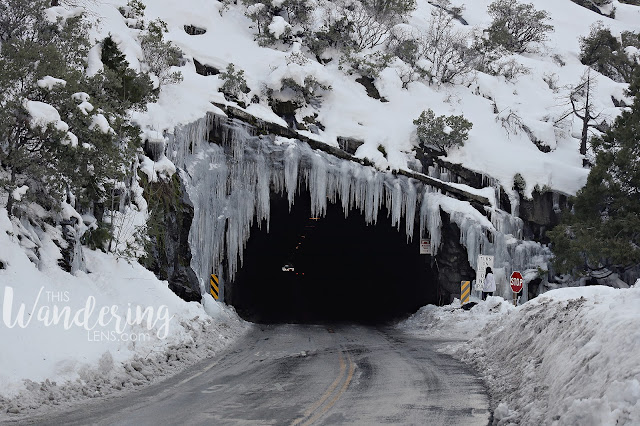 I'm glad I didn't drive.  First, because my little car would not have done well, and second, there were cars EVERYWHERE - many of them parked in places they shouldn't have been. 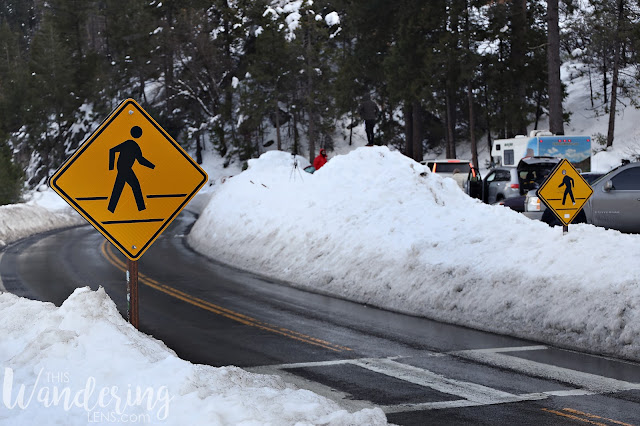 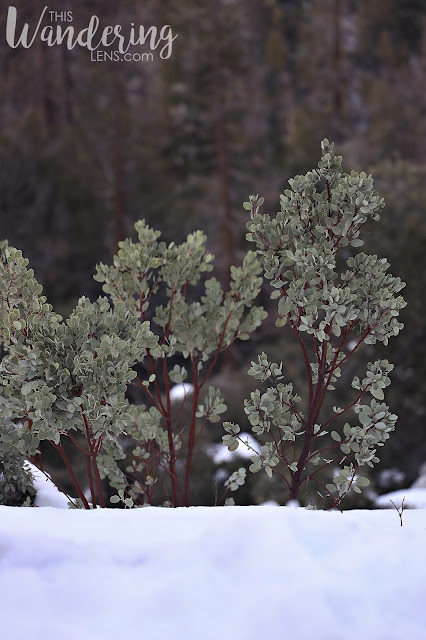 When you're limited on time, there is always this sense of urgency and you know you're rushing through getting your shots.  I really hated this feeling, so next time, I'm gonna plan to stay for a few days.  There were photographers that stayed in Yosemite for well over a week to stalk firefall, and now I see why that's absolutely necessary.  We drove for a while, passing many parking lots that were full. 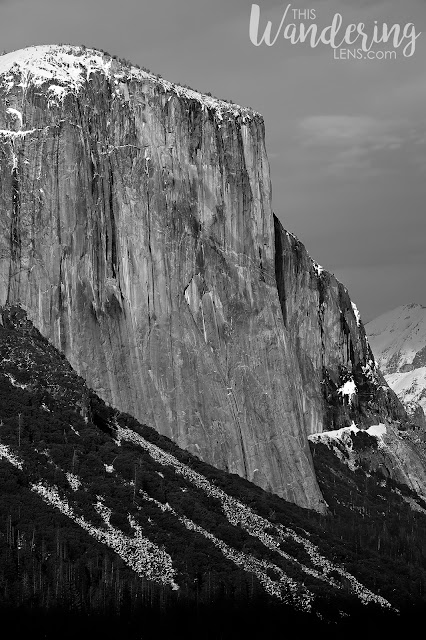 See? Cars - EVERYWHERE!  Luckily, we were able to squeeze into a spot and take a few photos  at Bridalveil Fall. 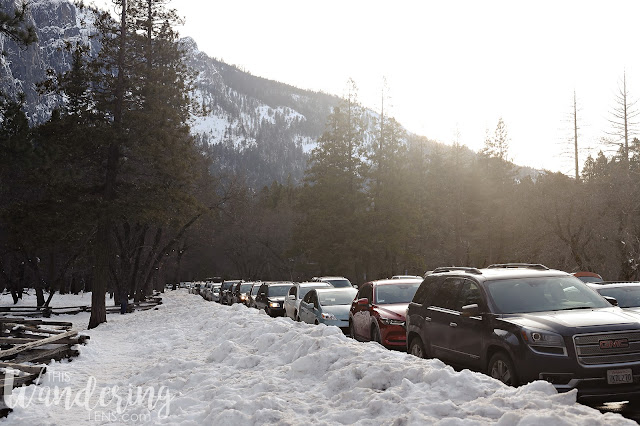 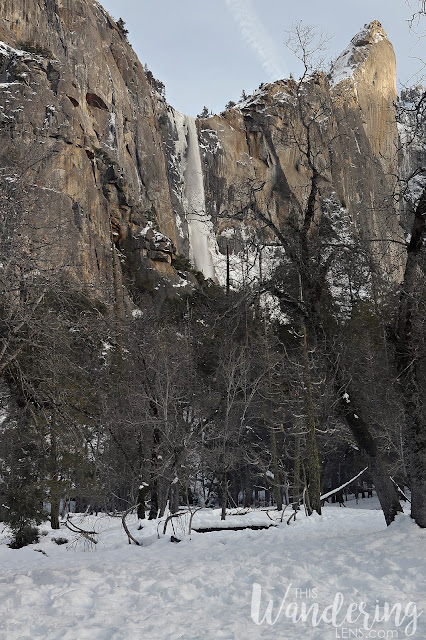 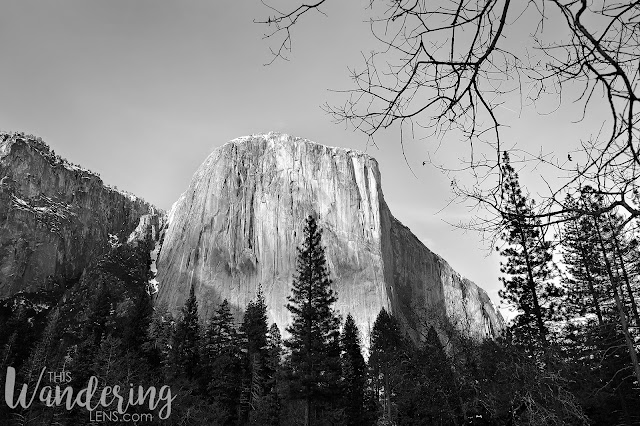 I really wanted a picture of the Yosemite Valley Chapel in the snow.  Unfortunately, there was no parking, so we had to "park" and take turns staying with the car in case it had to be moved. 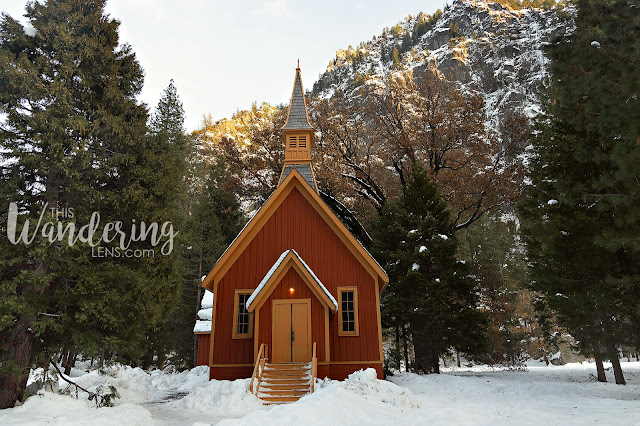 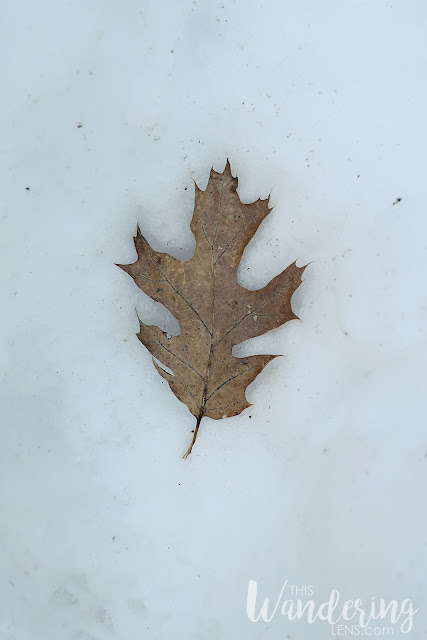 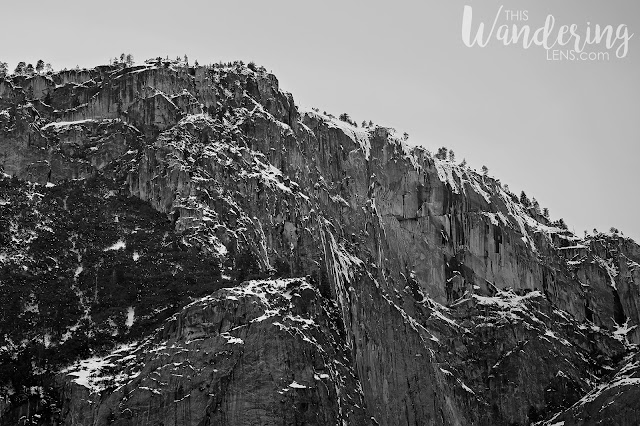 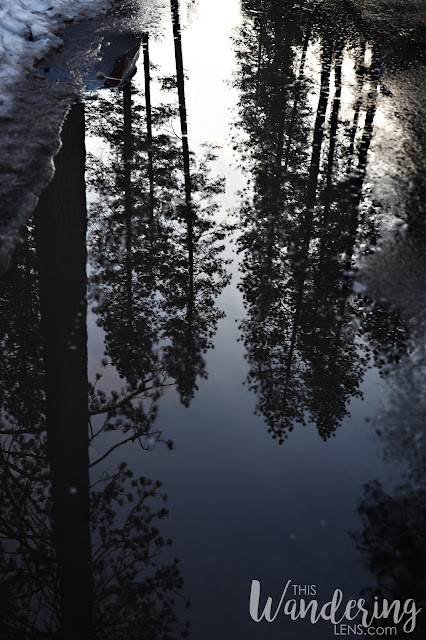 So you may be wondering where all the photos of firefall are, right?  Well, due to our inability to find parking, there was no way we were going to witness it.  I feel bad saying this because I know there were a lot of photographers there that day hoping to catch it, but I found out later that firefall didn't appear on this particular day, so I didn't feel too bad that we "missed" it.  I had this view as a back up just in case we couldn't get to a good vantage point in time for firefall.  You can't really go wrong with Half Dome, right?  It was a short hike in the snow to get to the bridge that overlooks the Merced River.  During some parts of this hike, I was more than knee deep in snow.  There was one other guy at the bridge shooting, and he mentioned that he drove down from the bay area for firefall and just couldn't find parking.  We feel ya, man. 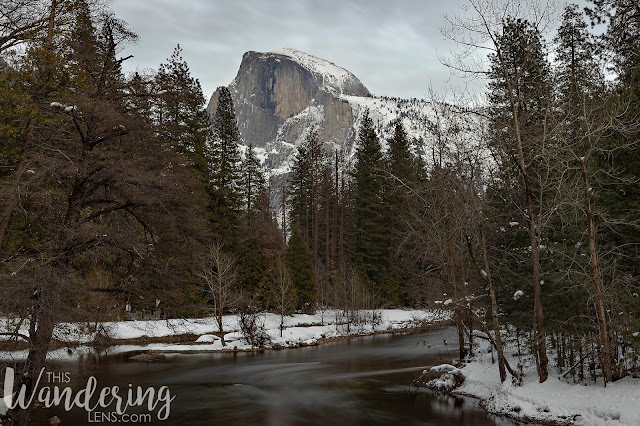 I'm not gonna lie to you.  This was tough to do, and like I said earlier, we probably only had about a total of one hour to actually shoot.  It was a long drive out of Yosemite as well, since all 6,000 people were also leaving the park.  I pretty much felt like I was dying from motion sickness on the drive back, too.  But you know what?  I'm still glad I did it!  It was this experience that allows me to offer you these tips if you ever decide to make the trek out to Yosemite during snow season.

1)  Pack some Dramamine - just in case
2)  Bring snow chains - just in case
3)  Wear clothes and shoes suitable for snow.  Luckily, I still had my snow suit from my snowboarding hobby that went to my craft room to die.  😂
4)  Bring plenty of snacks and drinks for hydration.
5)  Don't over pack your photography gear.  I think I brought along four lenses, and I probably could've done just fine with two.   Sometimes keeping it simple allows for more creativity, and definitely a lot less weight in your backpack!
6)  Find a map and scope out where all the parking lots are in advance.  This will allow you to create back up plans if what you originally wanted to shoot falls through.

Posted by This Wandering Lens at 9:45 PM