Bon Jovi Concert at The Forum

Who knows what took me so long, but ever since I was about 10 years old, I've wanted to see Bon Jovi in concert.  There was no way that was going to happen.  My parents thought people in hair bands were the devil. I still remember using the flashback button on our TV remote to switch back and forth between MTV and any other channel that was not MTV.  I longed to go to these concerts, and secretly flipped the pages of my Metal Edge magazines.  Who remembers Metal Edge magazine?! :)  Yeah, my mom would've been mortified.

On Wednesday, March 8th, 2017, my childhood dreams came true.  Despite not being a huge fan of concerts in general, I have a short list of bands/singers I'd like to see live.  Bon Jovi was within the top 3.  This tour was for their new album, This House Is Not For Sale.  I got a free CD of the new album with my concert ticket purchase, and it took me months to finally rip the plastic off and give it a listen.  I fell in love with the band all over again.  As cheesy as it sounds, that familiar voice that can only belong to Jon Bon Jovi brought back a rush of memories from my childhood.  I still remember the first time I saw the world premiere of the video for "I'll Be There For You" in my parents' living room on our RCA TV.  Who remembers when MTV did their world premiere videos?!  I was really hoping they'd add this song to their set list, but I didn't get my hopes up as I followed their Instagram feed from the tour listing each set list.

After careful research, I purchased my $40 Bon Jovi t-shirt from their official website.  I'm glad I did, because they were charging an arm and a leg (and some other body parts) for band merchandise at the concert.  This hoodie I wanted was $90! $90 for a hoodie! I also found out from their Instagram feed that they sell concert prints from each concert.  Now I know why they don't allow "professional" cameras into the concerts.  In retrospect, security was NOT very tight, and I probably could've snuck one in if I had brought a big enough bag.  I had to make due with my G7x.  Here are some of my shots that I was able to get when I wasn't too busy singing (horribly) to all the songs. ;) 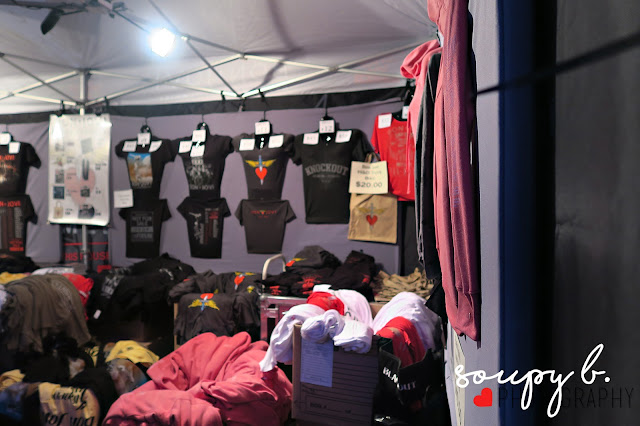 Bon Jovi did a contest where local bands could send in an audition video to win a chance at being their opening act.  This band is called Stellar Revival.  They had one song I thought was pretty good called "Saving Grace".  You can find it on iTunes. I felt kind of bad for them because the Forum was quite empty as most of the people were outside drinking and/or trying to park their cars.  NOTE:  The parking situation at The Forum is HORRENDOUS - especially when leaving a concert. 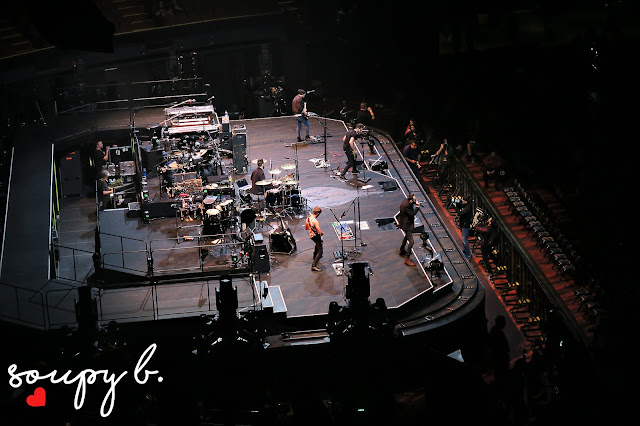 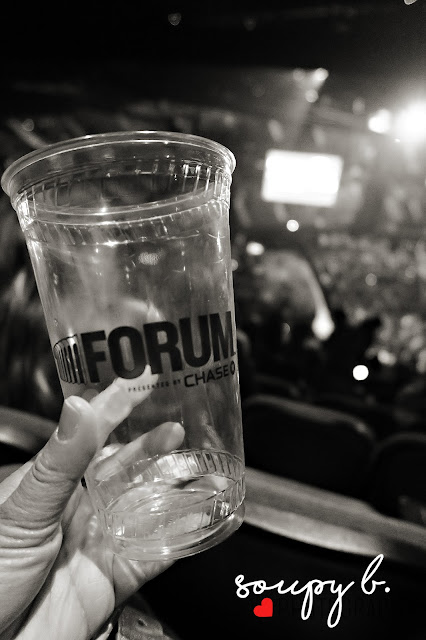 Ah, Jon Bon Jovi with his grey hair.  I think at one point, he just decided dying it would be too much of a chore.  Let me tell ya that this did NOT stop the ladies from loving him.  The ladies LOVE him - at any age. Speaking of age, the age range of Bon Jovi fans is startling.  I saw teenagers, the elderly, and every age in between at this concert.  It was pretty cool to see. 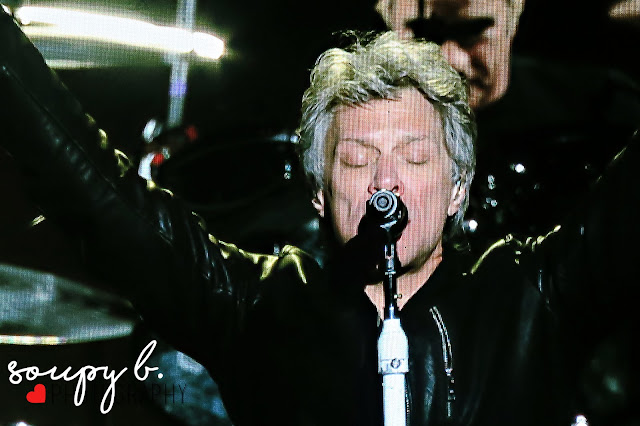 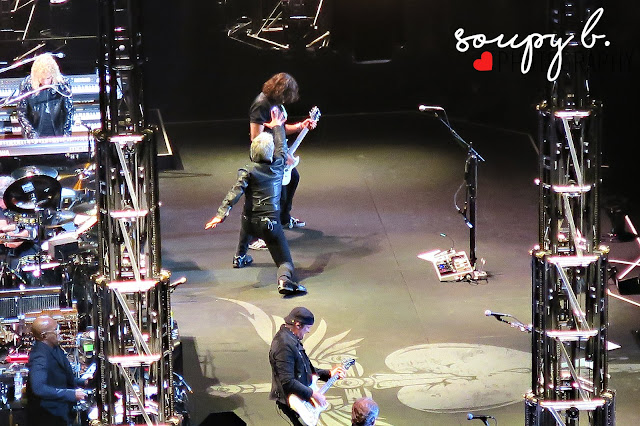 The new way to see a concert - with your phone in front of your face. :) 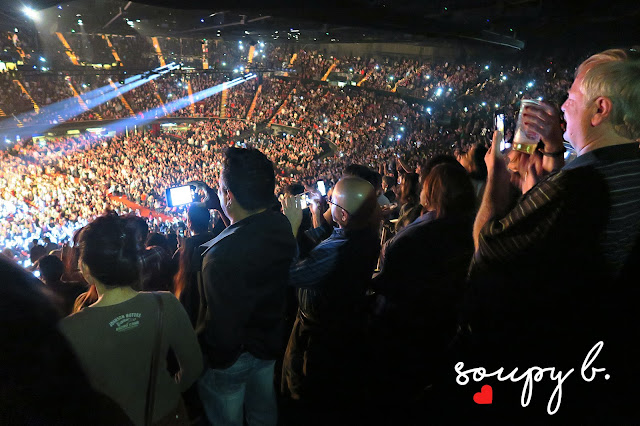 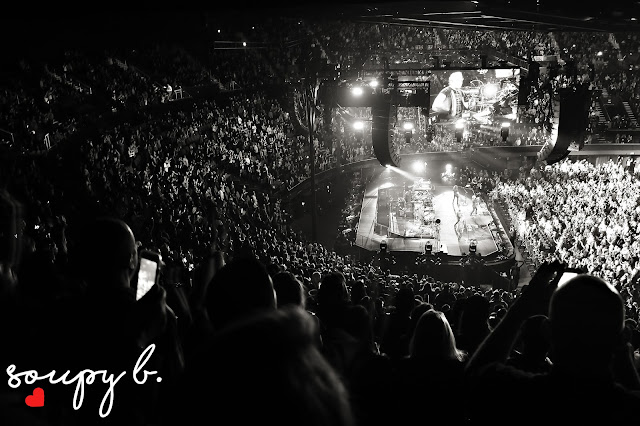 These guys are approaching senior citizen age, and they still sound AMAZING live.   If you Google "bon jovi documentary", there is one documentary in particular that really showed what life is like for the band when they're touring.  I loved everyone's candidness in the interviews, and you really feel like you get to know them more as individuals, and not just part of the Bon Jovi machine. 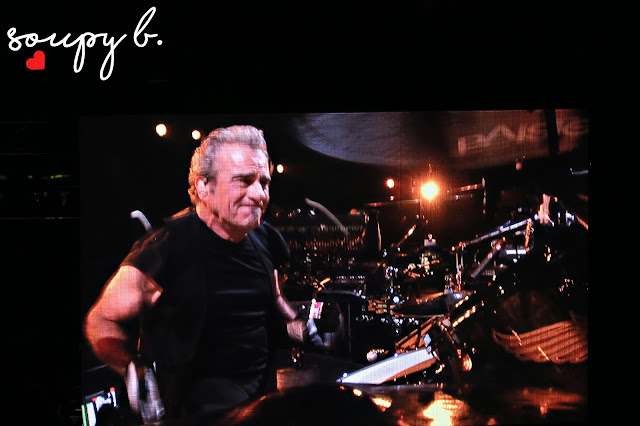 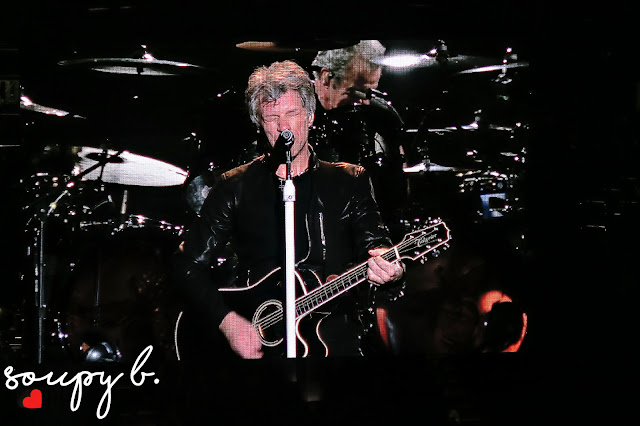 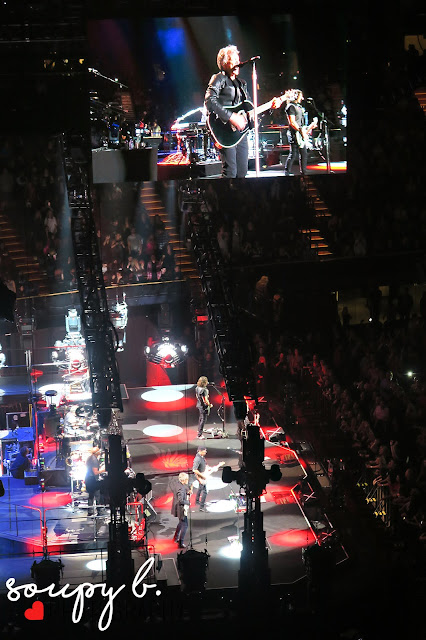 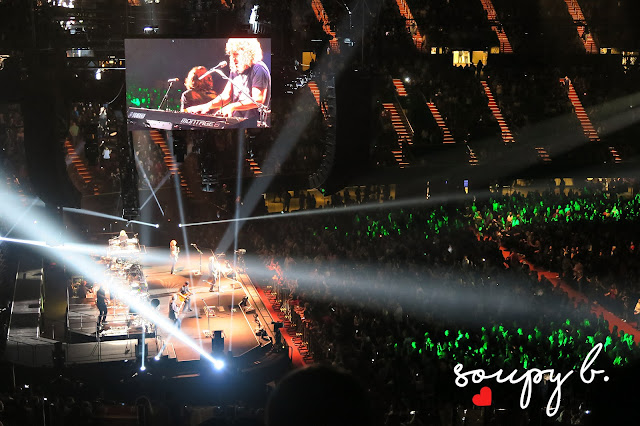 Just in case someone gets too excited???  This reminded me of a video I saw of fans at a Michael Jackson concert decades ago where people were literally passing out over seeing him. Luckily, my seats were in the nosebleed section, and I was safe from this threat. 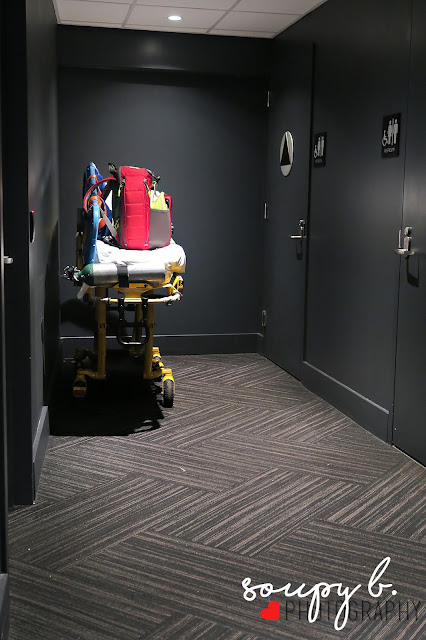 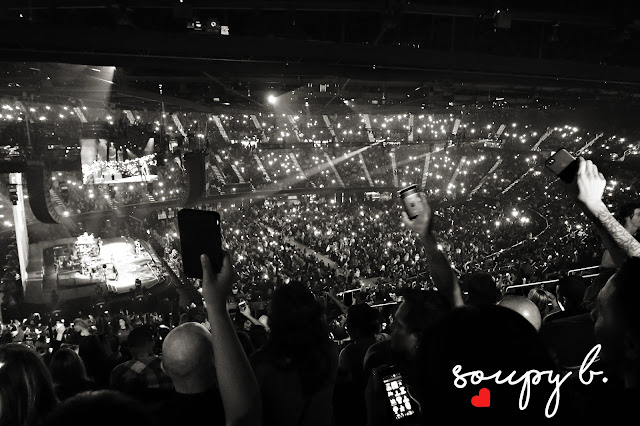 I guess the whole lighter thing is a no-no at concerts.  People were using their phone flashlights to create the same effect. 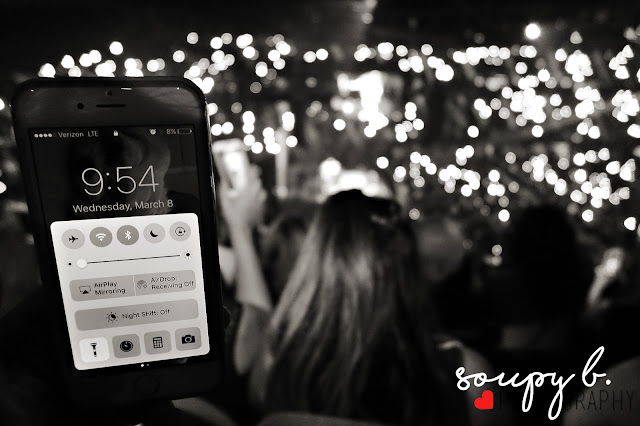 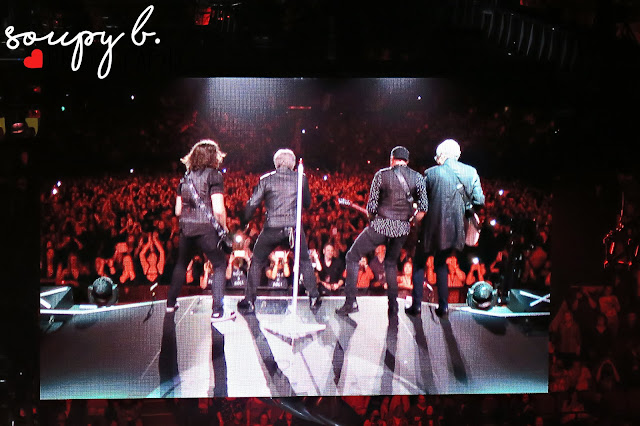 This is Phil X.  He was basically Richie Sambora's replacement after he left the band in 2013.  Honestly, I didn't feel like Bon Jovi needed Richie Sambora.  Phil X sounded spectacular.  I was quite impressed.  Not only did he perform each song as Sambora could have, he also has his own unique sound when you listen to their new album.  I think he is exactly what Bon Jovi needs as the band's identity evolves. 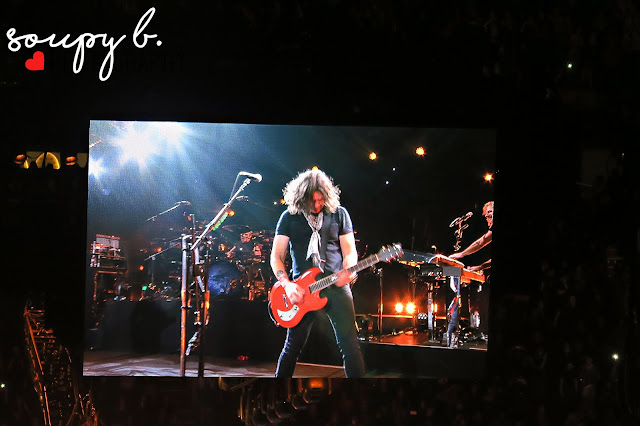 I really wished I had my DSLR and my 70-200mm lens. :'(  What I do have, though, is a bunch of video, and the distinct sound of my own voice sounding like bad karaoke in the background. 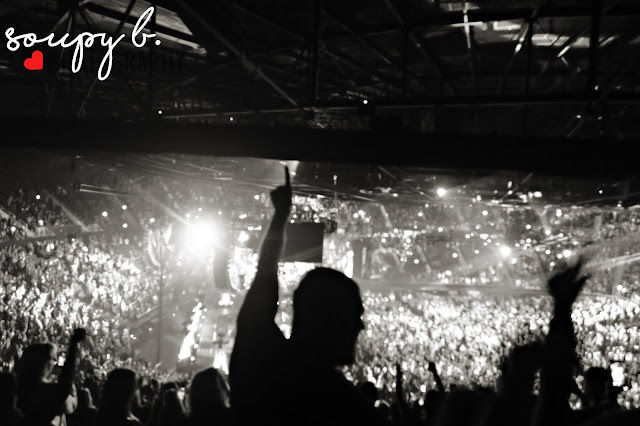 I thought the show was incredible.  They played a great mix of old and new songs.  In fact, much to the dismay of other fans, I wish they would've played more songs from their THINFS album.  If you haven't heard the album yet, you're definitely missing out.  My favorites are "Living With a Ghost", "New Year's Day", and "Rollercoaster".  It is the best blend of what the band used to be, and where they're headed.  As for where they're headed, let's just say their career has lasted over 30 years.  I wouldn't be surprised if they were still actively releasing music another 10 years from now.  And should they be touring again, I will be in the front row.  #buythevipticketsnexttime 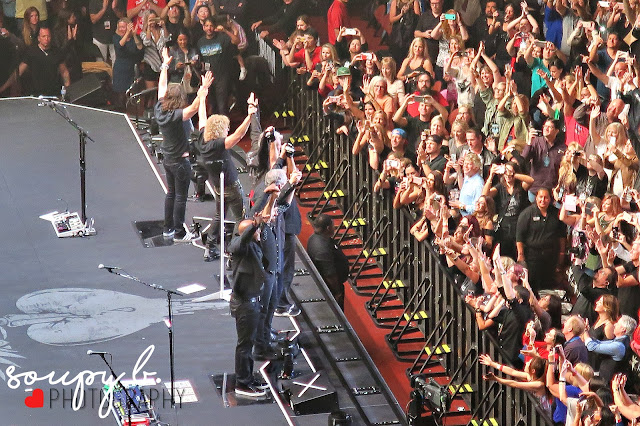 Posted by This Wandering Lens at 3:51 PM